* Scroll down to the UPDATE for dragonfly photo *
As birds twitter overhead and midday sun warms the grass, I sip my tea (iced) and contemplate tatting for the first time in days. Fireman Sprout is playing in the car a few feet away.

"Quick! There's a fire!" he says, grabbing his imaginary fire hose. "Let's go put it out!"

And so the stage is set for an outdoor tatting session.

But what to tat? A UFO or a new project?

There is the lovely 'Eventail' fan the online tatting class discussed yesterday. It was designed by a needle tatter named Lucette Evain-Lacan and is included on page 27 of her book "La frivolité à l'aiguille pas à pas." (Needle Tatting Step by Step)

Alas, I need to learn how to make Single Shuttle Split Rings before I can tackle it. *le sigh*

And here is my dragonfly, such as it is. I ran out of time before having to go pick up Big Daddy from the commuter lot and take The Sprout to his swimming lesson. Will have to complete it after swim class. 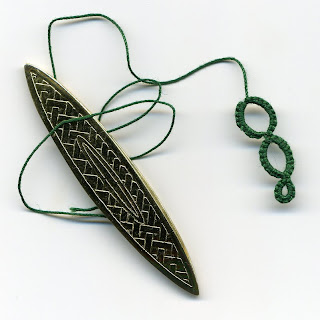 All in all, not a bad first try at SSSR's. More practice will make them less lop-sided.

As a funny aside, Riet named her dragonfly Libel...with all the muttered curses and name-calling, perhaps mine should be named Slander. LOL!

But seriously, no bad things were said about any person real or imaginary. (Though if the green cotton had ears...they would be flaming!) 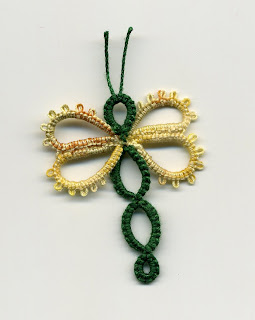 For the wings, I used two threads wound together (HWT)† – a pale yellow DMC Special Dentelles in size 80 and a Signature variegated machine quilting cotton in size 40 (M09 - Golden Harvest). It gives the wings just a hint of dimensional color.

†Jane Eboral defines HWT in her post HDT vs. HWT
Posted by IsDihara at 11:28 AM

They look fab, I have to give you our Brownie Chant for a great achievement

'Well done, well done, very,very well done'...with each word you clap your hands alternately in front and behind your back,

and in return..even more clapping

That was indeed a great achievement.

YAY! SSSR's! They're easy huh? Once you get them down they are easy peasy. Good job. :)

My SSSR's always come out lopsided, too. I try to make the first half a bit looser, thinking it will match the second half with the double core better, but somehow it never works out. Yet when I tat over tails (also a double core), I always manage to make it match the rest of the tatting. I guess you're right, it just takes more practice.

Looking forward to the dragonfly finished!

Love that shuttle too!

Thanks everyone for all the wonderful comments! I have posted the dragonfly photo.

The days are flying by too fast!

No problem! I didn't have computer access most of Wednesday and even Thursday morning. Lovely little critter!

Congrats on learning the SSSR!
Your dragonfly is great.
Pretty shuttle.

It's beautiful! I still have yet to attempt SSSR's.
Love your work.

The dragonfly looks great! I haven't tried SSSRs yet. Yours look good!