Guinness Book Record Attempt
Over 100 tatters around the world gathered for the first ever attempt to establish a tatting world record. (Some said the number was 127, but I was not able to confirm this.)

The photos were taken, the paperwork filled out and we'll wait to see what the folks at Guinness Book of World Records have to say.

Shuttles were very busy during the attempt. Hands were working at many different speeds, some faster than I ever imagined they could go. Want to take a peek into the room?

Tat Days Keeps Growing
Eighty-six people attended Tat Days in 2011, that's 15% more than last year. Fifteen registered attendees didn't tat, but added to the fun by coming along and dealing with our tatting obsession. Three cheers for Tat Days and the non-tatting but very good sports!

Tatting Display
Each year tatters bring some of their projects to show. The display never fails to impress. 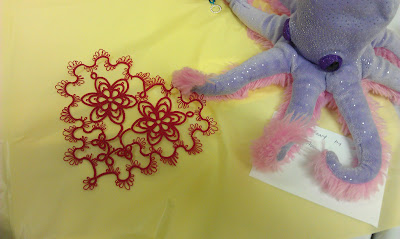 Martha Ess shared several original designs from her new book, "Playing With Picots." This lovely heart is dedicated to the memory of Elgiva Nicholls, who did such beautiful work with graduated picots. Octopus really liked it. Marie Smith tatted a dainty dress and hat for Barbie in hand-dyed silk. The pattern came from an old Workbasket magazine. Barbie never looked so chic.


HAND-DYED THREAD UPDATE: Marie Smith emailed the details for the thread she used on Barbie's FAB ensemble: Silk HDT by LadyShuttleMaker in the colorway "Enchantment" - Thanks! 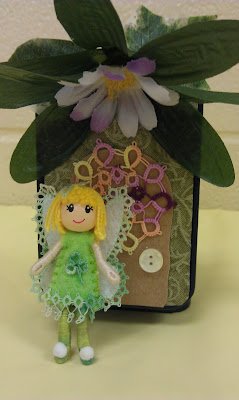 Karrieann shared the fairy house she made for Pillywiggin the pixie and the tatting she added to Miss 'Wiggins' attire and wings. Don't you just love the tiny white puffballs on her shoes? (...she reminds me of a certain tinker fairy.) 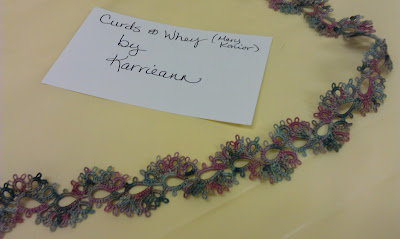 Karrieann also shared this beautiful edging, made from Mary Konior's pattern Curds and Whey. She didn't mention details about the lovely thread, but I'm guessing it was something scrumptious, dyed by her daughter Krystaldawne. Or perhaps Dr. Vonthreadmore?

HAND-DYED THREAD UPDATE: Karrieann commented, "The HDT thread that I used in Curds & Whey is by Karey Solomon... Seneca somethingother..." 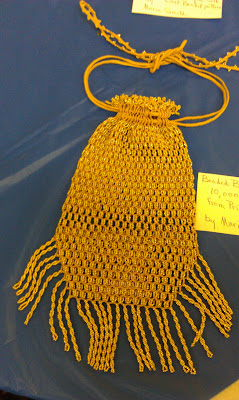 This gorgeous, beaded bag took my breath away. It was tatted by Marie Smith and if my "amazing powers of deduction" hold true, I think the partial image of the note card indicates that it was made up of 10,000 beads. (*bows* if I got it right...*ducks.for.cover* if I got it wrong) 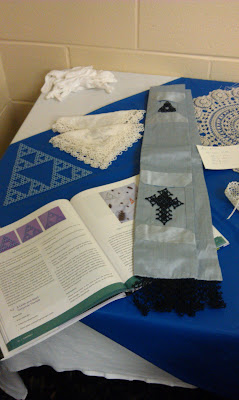 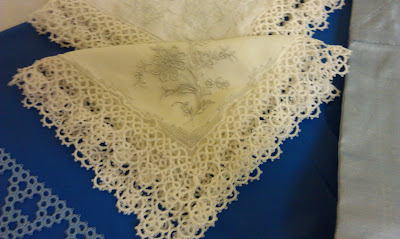 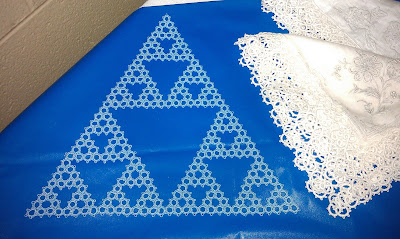 There's more to come — stay tuned for tales from the Friday Night Banquet, Day 2 of classes, Quilt Drawing and Silent Auction.
Posted by IsDihara at 8:22 PM

The HDT thread that I used in Curds & Whey is by Karey Solomon... Seneca somethingother...

That Barbie dress and the gold bag were amazing - but so is Marie! And I loved seeing John's tattig...

Thank you for the video and photos. I am sorry I could not join the Guinness tatting challenge as it would be 6am Sat for us here and I only remembered at about 3pm Sat.

Thanks for sharing some of the fun from Tat Days. I read about the Guinness world record try, but I was busy driving around the mountains at the time. Didn't remember it until later. It sounds like there's a good chance it will be a record - as there is no previous record to break. A great start!
Love the pictures of some of the things that were there. Thanks!

The Tat days were wonderful!! Thanks for your wonderful comments. It was a grand time. I actually came home and worked on the unfinished pieces. Two done. A couple more to go.
Have a wonderful day!!
john