Having already griped over the liberal picots in this otherwise graceful design, I turn my attention to the really long chains in round three.

Nineteen tatters are listed on Jon's blog as participating in this tat-along.  Several of those tatters have already completed this project and posted their lovely results.

So why has no one mentioned their experiences tatting the long, floppy chains in round three? Surely I cannot be the only one to approach them with prejudice.

EDIT:  Oops, I stand corrected. Tat-ilicious Jess had a fair amount of success with tatting her chain stitches unflipped, using the second shuttle.  I will give that clever trick a try. 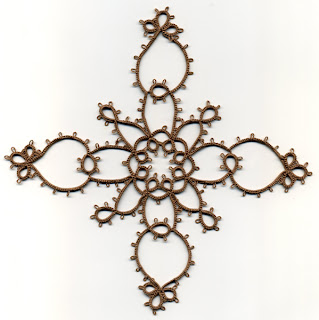 My dislike for long, floppy chains can be traced back to my participation in the 2009 Design_Tat online course. The class discussed my long floppy chains at length (see the picots?). It was a great learning experience. 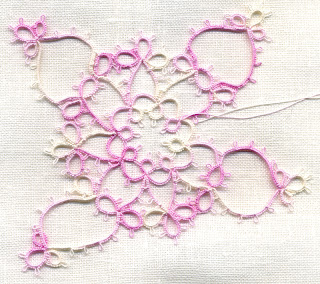 Determined to overcome floppy chain syndrome, I reworked the assignment.  The "onion dome" shapes were lost in the process of retro-fitting stability into the design.

EDIT: Two bits of wisdom I took away from that particular lesson were "don't retro-fit stability into a design" and "designing takes patience and PERSEVERENCE."  I guess an unexpected thing I took away from that lesson was a (perhaps unhealthy?) dislike for long chains with regularly spaced picots.

Ever since, I have avoided long floppy chains, especially ones with lots of decorative picots.

If no one else was willing to tackle this issue, I was going to give it a try.  Substituting the Double Double Stitch didn't work because the resulting chain was too long. Adjusting the DDS stitch count was a bit problematic because of all those picots, so in the end I decided to just tat it as written and forget about stabilizing those floppy chains.

But I can't stand it. It is driving me crazy!

Those of you who have finished the doily, does your doily stand up to the flop test?

Gentle tatters, I ask for an open discussion of long, floppy chains.  Help me to learn how to use them advantageously and without prejudice.  Whaddya say? Will you weigh in on "flop?"
Posted by IsDihara at 1:24 PM

Well I LOVE your long floppy chains in your design. It would look very elegant and lacy when sewn onto a piece of fabric - say for a table centre. Wouldn't be any good as a pendant but I think it's very, very pretty.

As one who test-tatted your onion-dome motif, I still maintain that it is a very attractive design. I have the version I made proudly displayed on a table in my living room. I also thought the comments you received on that design were unnecessarily harsh.

It is true that long chains can be challenging to tat because it's hard to keep the tension even. And yes, when you pick the piece up they will flop around unless they are stabilized by something else in a subsequent round. But does that really matter if the piece is going to sit on a table or be appliqued to a piece of fabric? As long as you're not using a piece like that for a Christmas ornament, suncatcher, jewelry, or anything else that's going to hang in mid-air, I really don't see the problem. Just tat the chains slowly and carefully to maintain an even tension.

I honestly haven't been paying that much attention to the tat-along. Is there another round to the doily that will stabilize the long chains? (Or maybe you could add one of your own!) Even if there's not, it doesn't seem like that big a deal to me because a doily is going to sit on a table so floppiness is not an issue.

I have not yet tatted that round, the Lace Mat has become a WIP as I tat snowflakes for Christmas presents.
I can see your point about the long chains and I will have to take extra care to be sure that I have equal length and tension when I do have a chance to tat it.

Awww, THANK YOU, Jane and Miranda for your kind compliments.

I remember being so grateful (in 2009) for the lovely, supportive praise my first design effort received. I am STILL grateful!

*chuckles* Miranda, you were brave to volunteer to test tat for me then. Thanks again for doing it.

And thanks to both Jane and Miranda for continuing to inspire my design journey.

I have not given up on my "onion dome" project. In fact, looking at it today I had an idea for a way to re-work it. Let's see how it goes this time!

Miranda, there is a fourth round for this Lace Mat.

It adds depth and even more grace to the lace. Though, I would have to defer to others' viewpoints about the amount of stability it brings to the party.

It adds more stability using less thread; don't know if it would make the chains way too long or not, as I haven't tried this tatting challenge.

Either way, your work is absolutely lovely (as usual!)!!

Hmmm what does that mean, tatting it unflipped? Am I missing something here?

I had a look at mine as I forgot how I dealt with the tension in those long chains. I realize I used beads in this row, because I thought they would give the chins more stability and I believe it does, without changing the shape at all.

But I do not know ow to keep the tension precise in this situation except as Miranda says, by tatting slowly and deliberately.

I am interested what others have to say about this.
Fox : )

Having tatted the third row of long chains with picots in this lace mat pattern, I can totally understand your frustration. I don't fancy them either. I do not, however, let them get to me. I tend to tat tightly so that my stitches don't look so uneven. I think I have some success there -- not so floppy long chains. LOL Don't think I can offer any solutions, perhaps a bit of relieve that you are not the only one facing this issue?

I am an avoider of very long chains, not participating in this tat-along! I understand the bit about having it on a table, but even so it can be difficult to get the chains to look even, rather than lop sided.

The works of tatting you are showing look really beautiful to me!! :)

It's true, I used unflipped stitches for just about every long chain. My big problem, I would assume is the problem for others is that the core thread gets so out of shape when doing so many stitches. So, using the unflipped stitches helps a lot. :o)

As the one who created your aversion to long unsupported chains, I can only share with you my experience. One of the first doilies I created is the yellow one in my gallery here:
http://www.rsbriggs.com/slb/tips/gallery.html that has all the lovely negative space in the middle. The chains wrapped around the clovers and rings were really floppy, so I tried to hold them in place using the rings on the next row, except that I was deliberately trying to make some negative space at the same time and I used even longer and floppier chains while I did it. Those chains looked really, really floppy and the only way I could think of fixing it without cutting everything off and starting over, was to tat a row of ring and chain around the outside of it so that the rings joined side by side could hold the whole thing together.

Floppy chains are OK if the piece you are working on is intended to be attached to a fabric backing, or if they are being held in place around an ornament, but they don't hold their shape well enough to be a pendant or hang as a tree ornament, especially if they are on the outer round of the project.

When a pattern calls for really long chains I just make sure that I hold the stitches in place as I tat, then I snug the chain up tight before I proceed to the next element. When the piece is finished, I block it making sure that the long chains are pulled into shape and not allowed to twist.