Day 4 of Jane Eborall's Tat It And See is here and I found the next wee bit very interesting.  Rings get smaller as they progress down the center line which reminds me of the handle of a spoon.

Could it be a spoon? The open picots seem to indicate that we will be tatting "around the horn" and doing something mysterious at the top of the work. That is was is so addicting about TIAS, not knowing where the tatting is headed.

Which segues nicely into the Muppet Thought of the Week:

My Day 4 photos are presented by Kermit the Frog because he is a very well-traveled frog. 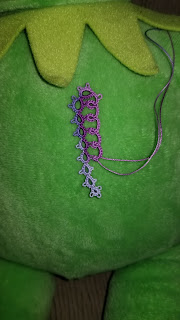 What does Kermit think about Day 4? At first I thought he might have been hinting that we were tatting a glow worm.  Kermit eats glow worms, so let's assume he's hungry and carry on. 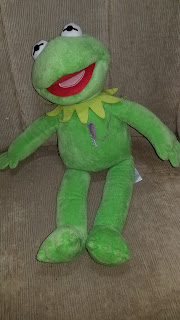 Now I have two guesses to share with my Day 4 photo:  a spoon and a glow worm!

Kermits looks quite pleased with himself.  Which way will the TIAS 2018 go?  Who knows? Each Day gives us another clue.
Posted by IsDihara at 10:17 AM

I told Jane I thought it might be her version of Not A Candle.

Sound very funny love Kermit he is so wise🐸

Don't let Kermit eat it, whatever it is!