Flame Lantana up my sleeve 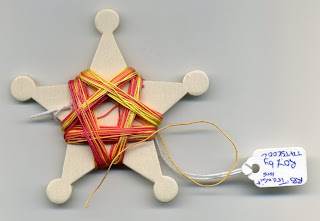 By now you have probably read Tatskool's post about the first in her new Transitions series of HDT. Code named ROY, it later was named after a lush Australian blooming plant, the Lantana.

You have no idea how hard it has been not to show you this thread. Keeping it under wraps was quite a challenge. Imagine me sitting on my hands resisting urges to madly type out my squeals of glee!

Far be it from me to pass up a "cahoot-y oppor-tooty!" It has been loads of fun pondering names and chatting about color. Here is what ROY reminded me of early on. 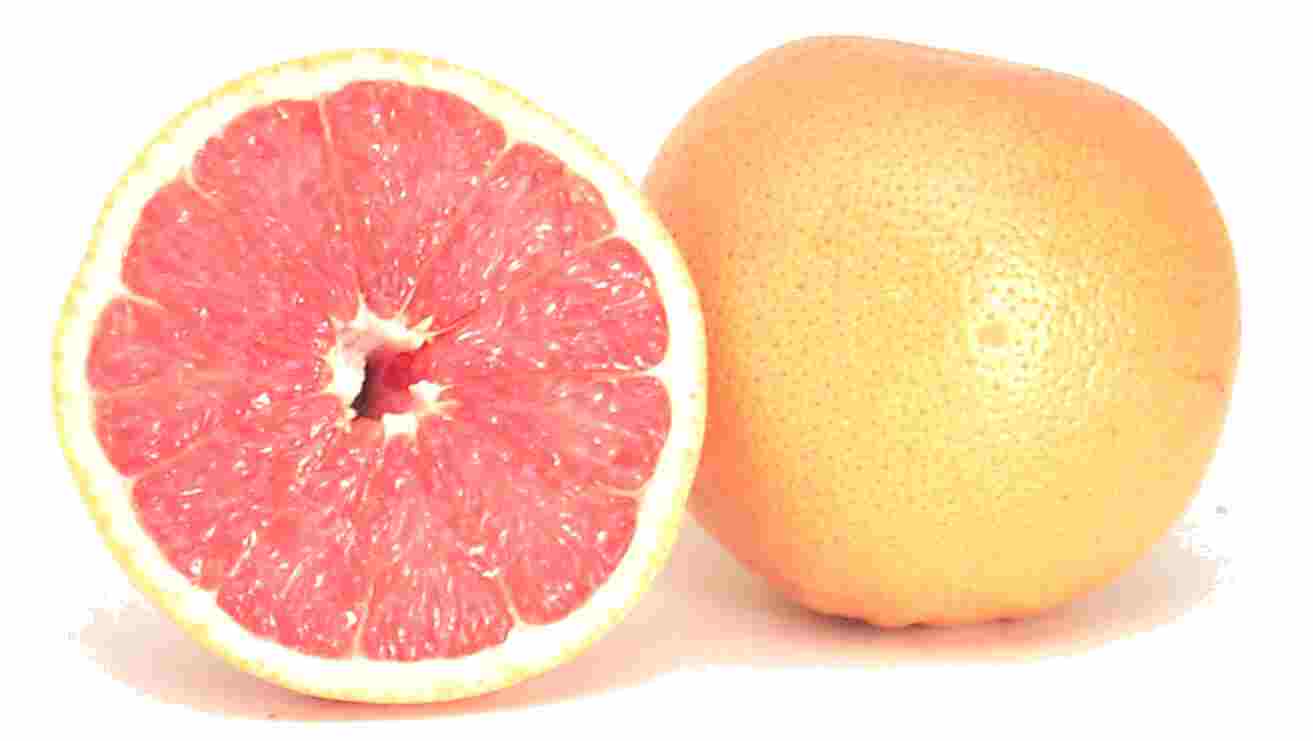 How boring is that? Tatskool's fiery lantana flower is so much better. Spot on!

Then the way the orange plays on and off the yellow put me in mind of molten glass†. Here is a slide I shot in 1986 for a photography class. Tatskool thought the molten glass was better. Closer to lava. She was right again. 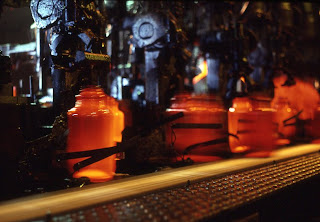 †This nostalgic photo was taken at the glass manufacturing plant in my home town in Western Pennsylvania. The plant closed down shortly after the photo was taken.

Where are the Samples?
Hats off to the wily Fox for tatting a great motif that shows how well Flame Lantana pairs with black. My first thought when I saw her post was, 'Wow, that would make a lovely Monarch butterfly.' 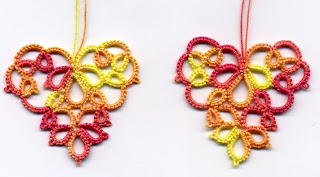 My first sample is Betsy Evans' Rainbow Heart Bookmark.  It is tatted in size 20 Flame Lantana.

You can see that I had to tat it twice. After not following my better judgment, I left a picot open when the diagram clearly showed it joined. (The written instructions said not to join.) The end result was the glaring little blighter on the left. See it? 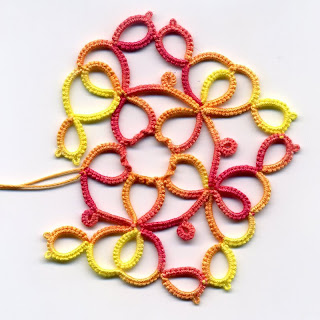 My second (third if you count the heart do-over) motif is from a doily by Iris Niebach. I downloaded the pattern from her free pages. Here is the border pattern.

See how the colors flow! No pooling whatsoever.

It's too bad I ran out of thread on the final repeat. Only eight inches of thread were left on each shuttle so I had to stop. (If I hadn't tatted the first heart twice I would have had plenty of thread to finish.)

Eagle-eyed readers will also surely note that my center ring of hearts are not dimpled as shown in the diagram.

Fear of breaking and wasting precious thread led me to use the dimple technique in the Jessica Rose pattern. I thought it would be a good substitution since it is worked in half hitches as are the Josephine knots. It gives the center a ruffled look, which may not be pleasing to everyone.

I found this awesome pattern on Dale Marie's tatting blog, Shuttle and Thread. She is combining seven of these heart-filled motifs into an incredibly lovely doily. Please do go visit and compliment her on her beautiful work. The tatting is simply stunning.

Apologies to Iris Niebach for turning her hexagon into an incomplete pentagon. But it was so much fun to watch the colors flow and mingle as this motif took shape.

Tatskool has another first-rate thread to offer. And if her future releases are anything like this one, [I know, but I'm not telling!] you bet your sweet bippy I'll be in first line to get mine.
Posted by IsDihara at 6:00 AM

Holey moley you did me proud! You are always an inspiration to me with your ideas about my colours.

I really loved the idea of the Ruby Grapefruit and the molten glass is just what it shouted at me.

Fox's motif is spot on too, in the middle of the night it suddenly hit me that the black is like the unburnt coal in a fire...why didn't I see that straight away.

Thank you all for your lovely comments. You flatter me and make me blush.

Tatskool, inspiration flows both ways. Even though I had the molten glass image all along, (see those black machine parts in the photo?) I didn't "get it" until I saw Fox's motif!

Fox, I agree that the molten glass image is perfect -- for your blog post! You've done wonderful work.

Isdihara, I have sent you 5 different e-mails trying to get my mailing address to you. I don't seem to be able to get through. My e-mail address is: tatting-marie@embarqmail.com. Please e-mail me. I can not reach you. Thanks, Marie

Tatting-Marie, I got three of your notes last evening. I have emailed you and will send out your giveaway prize today!

Yesterday(Saturday's) mail brought me your wonderfully scented "Pamper Yourself Giveaway" gift package. You were right when you said it smelled soooooooo good! Can't wait to use all the wonderful products in the package. Thanks, once again for the gift. Marie