Sorry to all who came looking for a Tatting Tea Tuesday post last week. I had a doctor's appointment so I published the Zoo Flakes post instead.

Later that day I checked other TTT posts and saw that the sweltering heat in the US kept more than a few tatters indoors with their laces.

Wanda's post reminded me that I have this delicious Vanilla Rooibos tea just begging to be brewed. So today I am enjoying some iced Vanilla Rooibos and having a Tatting Tea Tuesday do-over.

But before I start tatting, I want to share some news.

Ciarrán got so excited he tore open the package and crawled out with the contents. 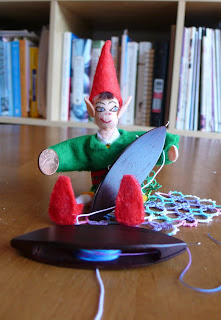 Holy Schemoley! She sent me one of her Diana Andra shuttles as a gift! See it here with my favorite rosewood shuttle? I have been on the look-out for the artisan of this model of shuttles for a number of years.

Here's the backstory: two weeks ago during one of my blog-crawls, I discovered this photo of Diane's. Eureka! Could it be?!?

LLL Diane shared where she bought hers and suggested I contact the artisan via Turn of the Century.

Unfortunately, Diana Andra had to stop making shuttles due to carpal tunnel syndrome. I shared this information with LLL Diane and she sent me one of her shuttles.

I am thrilled beyond description to be the recipient of such generosity and kindness. Thank you, Diane. I will treasure this shuttle forever!

Stop by again tomorrow for the tatting I meant to show you today. I've got to go try out the gorgeous new Diana Andra shuttle!

NEXT: Queen of Hearts Three Ways
Posted by IsDihara at 3:00 AM

It's funny, I remember reading that post. I wonder how I missed the part about the rosewood shuttle? Of course, I hadn't won that eBay auction at that point.

I'm happy to have helped you in your quest!

Ha! Ha! I just read the comments from the post about your favorite shuttle... I DID notice the Diana Andra shuttle! For a moment there, I thought I'd lost my marbles!

Hello IsDihara, Yes, they are lovely shuttles to work with. I have 6 of them and my Mom has 5. All of the exotic hardwoods too. We don't know for sure if they are made by the same person. We got them in 1989 at a little local needlework shop in Beaver Falls, PA, which has sinced closed. Turn of the Century is in Ohio and not too far from where the little shop was, so it is possible our shuttles are from the same maker.

Wowwee! BTW, I always wondered how to spell shemoley!

That Diane is one generous gal. Lovely gesture, super shuttle.

I might take a moment to mention that I require a new car - mine is disintegrating into rust as I type - just in case Diane is in the mood... lol!!!

Aren't you the fortunate one! I'd be dropping everything to try tatting with that as well: )
I was planning on having a glass of the Vanilla Rooibos tea today also, but it didn't happen. I plan on having it tomorrow instead.

Lucky you, Diane is such a nice person.