Nineteen years ago today, I said, "I do," to my husband, Todd Parent. He proposed to me in 2002 on a beautiful beach in Nags Head, North Carolina. It feels simultaneously like yesterday and a lifetime ago.

I married him because I knew he would keep my laughing when I got too serious; because his blue eyes were clear, bright and keen, the bluest I had ever seen; because his lips were eminently kissable, and because I knew I could love him to the end of my days.

I was delighted when an unexpected bouquet was delivered this morning. I shouldn't have been surprised, except that I NEVER get the date of our wedding anniversary right. Never. Todd has always tolerated this failing with grace.

Nala was fascinated with HER colorful new bouquet, blithely posing with the largesse. (She is a cute little dickens, isn't she?  I hope she doesn't knock it off the table...) 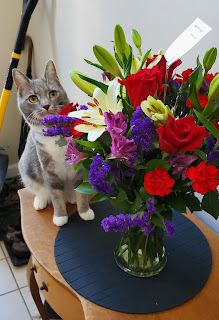 Strawberry Heart with a Celtic Top by Birgit Phelps

Don't let this juicy gem fade into antiquity. It is getting harder and harder to find. Save the pattern. Tat one today!

Strawberry Heart with a Celtic Top by Birgit Phelps

Posted by IsDihara at 9:26 AM No comments:

Still Working on a Snowflake

"Silently, like thoughts that come and go, the snowflakes fall, each one a gem."  ~ William Hamilton Gibson.

I have been working on a mixed media snowflake for several months now.  Like a delicate snowflake, ideas for it have come and gone, melting before I can turn them into reality. I can only presume that other designers have a clarity of focus - or a process - that enables them to progress more steadily, but this has always been mine.

I began with an article from the Online Tatting Class (founded by Georgia Seitz) that I had shared in August 2003 called Mixed Media Heart. It was a heart my mother found at a flea market in Florida in 2002. My parents had only just begun their 19-season-long winter treks to sunny North Florida. This heart was found after rummaging through a box of crocheted lace doilies. Haven't we all enjoyed a good rummage through the doilies, looking for tatted treasure?

Carolyn Groves wrote a pattern for the heart from the photos I sent to Georgia. Thank you  again Carolyn for your excellent work!

Georgia's original post begins with "There is an old saying that needleworkers should not mix their media."  I believe that old saying is wrong. Throughout history artists have excelled at combining mediums as suited their vision. The 2003 heart mixed tatting with thread crochet. I wanted to reshape it into a snowflake with my own creative vision. With any luck it would be a gem. 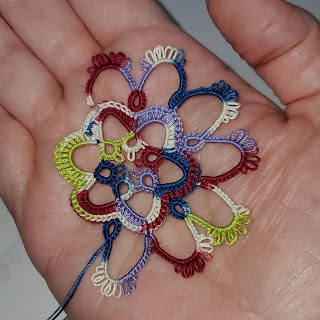 Round one combines six tatted rings, chains with decorative picots, and a crocheted chain across the top of the picots to add texture and dimension.

The decorative picots in round two mirror the technique in round one. A single shuttle split ring bridges the gap nicely, but I needed two threads to tat the next chain. See the problem? Several faltering attempts later (see photo below for the most hopeful of the discarded attempts) I changed the plan again. 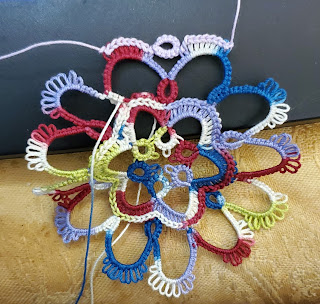 Here is an Instagram photo of a pretty snowflake combining tatting with Turkish needle lace. It is my inspiration for round three, if I can recreate the needle lace. Wish me luck! 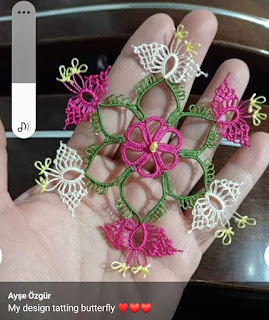 "I wish I could press snowflakes in a book like flowers." ~ James Schuyler.

Brownies in a Pie 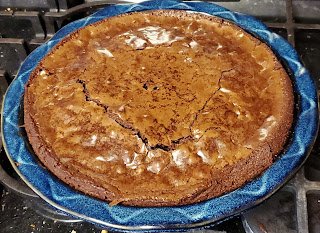 Brownie cravings are real. My sister gifted me this gorgeous, ceramic pie "plate" at Christmas. It is the deepest pie dish I have ever seen, which makes for X-treme crave-bustin' brownies.
Posted by IsDihara at 10:01 AM 4 comments:

Hellooooo!  May 30th is a holiday weekend in my little corner of Tat Land. A few years ago, I spent some time creatively and ended up with a tatting design doodle.

Let me say up front that designing does not come naturally to me.  I often look to nature or vector graphics or marketing labels or trash or anything I can find to get me started. (Even then I struggle, sweat, curse, cry and give up most of the time.) 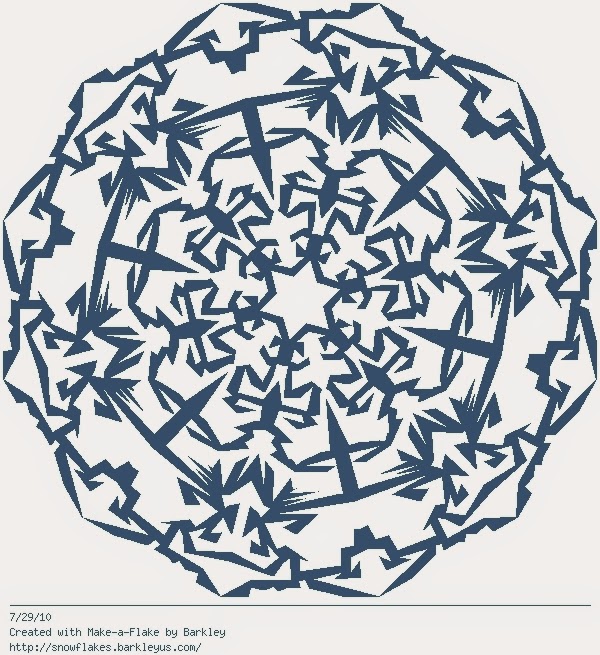 The interesting part for me is whether to attempt tatting designs from the negative spaces or the positive ones? A question for all you accomplished tatting designers:  is it okay to switch back and forth between negative and positive space when you replicate a drawing?  Or should someone like me stick to one or the other?  I would love you hear your thoughts.
Posted by IsDihara at 7:06 AM 8 comments:

DORIS is Ready for Her Debut

Three years after Coronavirus disease 2019 (COVID-19) was officially declared a pandemic and the world went on lockdown, me and mine choose to continue to wear masks and go about our daily routines as best we can.
Lockdown was a great time to dust off my old Tatters Across Time binder (2005) and begin improving my proficiency.  Alas, I continue to struggle with one assignment -- the old way of tatting dimpled rings -- and have put the project in "time out" until I tat a satisfactory sample.  This muddled mess is my latest attempt: 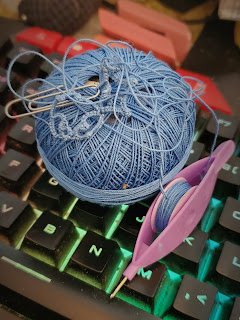 In January 2022, Jane Eborall resurrected her beloved T.I.A.S. (Tat It And See) and I joyously joined, albeit several weeks later than everyone else. If you have never taken part, the fun of T.I.A.S. is in not knowing what you are tatting. The pattern is split up into small bite-sized pieces and released every few days.

You wind on some thread, tat a few rings/chains and wonder as the design emerges. This year's mystery did not disappoint. Right up until the end participants were uncertain what they were creating. Once I had gotten to the snout stage, I dubbed my "whatsit" a platagon (platypus-dragon) named Durante. Now I marvel at how close my guess actually was.  Isn't he darling?

For those who like to know, Durante is made with 20 Lizbeth® #716 Maple Syrup.

In February 2017 Robin Perfetti posted a bookmark pattern on her blog Tatting by the Bay.  I had been wanting to play with triangles to build a snowflake and her pattern was perfect inspiration.


Gall bladder surgery in December, 2017 and a hernia repair in early 2018 required some time off to heal. Time slipped by (as it does) and before long it was Autumn, then end of year.

In 2019 I rededicated myself to tatting. This snowflake was started as a "triangle-a-day" project to make tatting a part of my daily life again.  It was fun determining the path this work would take to minimize hiding thread ends.

Here is my summer snowflake, tatted in size 20 Lizbeth® #625 Plum.  Thanks to Robin! 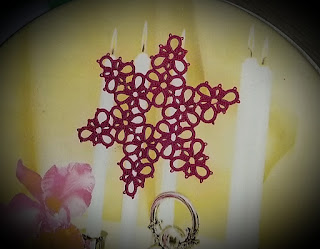 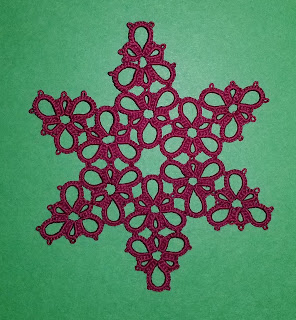 She wore white heirloom lace about her throat

And in her hair a bright golden feather

A pearl like a plum hung ripe from her neck

But her smile fetched ten gold together.