Autumn in the Air

Champagne grapes, crisp apples and pumpkins on the vine. Morning fog too. These things make my fingers itch for knitting wool. And baking pies and pumpkin chocolate chip cookies. And scrapbooking.

Autumn must be in the air.

Another summer is drawing to a close and I haven't made the Valiere Square ice cream cone. AUGH! (Charlie Brown's anguished cry after Lucy pulls away the football.)

Though the morning air felt a bit nippy, the afternoon was sunny and warm. I am taking it as a SIGN to start the Valiere Square ice cream cone.

This is how far along I got during The Sprout's play date at a local playground. 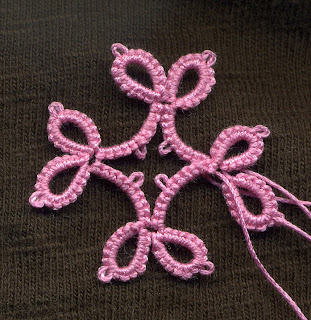 My focus was to tat entirely by feel - not scrutinize the stitches - and keep my eyes on The Sprout while he raced around the playground. It was hard to resist scrutinizing, but I managed to not look until I needed to make a picot (gauge-free).

Round one looks uneven but with practice it will improve. This time last year I physically couldn't make stitches without looking at them. I feel satisfied with this improvement, even with the gapsosis in the sample.

The tea kettle has come out of summer storage and has been working overtime since Sunday brewing Theraflu concoctions for Hubby with a Headcold.

Hubby is better today and the kettle can again return to its first duty - tea. My tea infusion for today is a delicious Vanilla Nut Cream Decaf.  It's not Lord Nelson, but it is tasty.

Tatting Tea Tuesday
A hearty, warm welcome to all "communi-tea" newcomers! If you have read about tatters who drink coffee, diet coke or beer with their Tuesday Tatting (I still chuckle over Tatting Beer Tuesdays. What next?) and are slightly confused...


Here are the rules:
(Adding the communi-tea part is optional, I just like the pun.)

And don't forget to leave me a comment with a link to your post or message so I can come see.

Wishing you all blissful me time to create something beautiful. See you next Tuesday for more communi-tea!
Posted by IsDihara at 8:47 PM 3 comments:

Yesterday I spent my blog writing time working on a newsletter article for my lace guild on the topic of Tat Days. The rest of the evening was gobbled up preparing The Sprout's preschool gear, nursing hubby's headcold and making home-made chicken soup.

So (if you don't mind?) I would like to beg off my usual Tatting Tea Tuesday routine to share the Tat Day article with you.

Classes, contests and camaraderie punctuated the 8th annual Palmetto Tat Days, held on August 27-28, 2010, in Toccoa, Georgia. IsDihara attended with her family and reports back with highlights of the two-day event.
There is much to be excited about if you are a tatter, like me, attending her first Tat Days conference. Hosted by the Palmetto Tatters Guild, this annual event welcomed 75 tatters and their guests, spouses and friends from around the world.
What a marvelous, tat-in adventure it was! My first impressions were of warm welcomes, adding faces and names to dozens of online friends, incredible classes, shopping and more.
Eight teachers and assistants shared techniques, tips and patterns in more than 30 classes, plus early bird and night owl tatting sessions. Outside of class, games like Tatting Jeopardy, Tat Off! (a speed tatting contest) and a door prize game kept everyone in stitches.
If you came to tat, you had plenty of opportunity to do it nonstop. But learning and levity were also on tap as tatters reunited with long-distance friends or put faces to names for the first time. The atmosphere was very much like a family get-together.
I marveled at seeing more than one or two tatters in the same room, interacting and learning together. I was amazed at the silent auction items, the Mary Konior display and the display of tatted works people brought just to show and tell. Each year one show-and-tell project is awarded a People’s Choice prize and another prize is awarded for Best of Show.
In addition to the display items, the tatting people wore on their bodies and the laces flying off their shuttles and needles were gorgeous. Tatted hats, vests, lanyards and jewelry were but a smattering of the lace modeled around the site.
The crazy quilt drawing and live auction was a huge success. It raised a record-breaking $3,200 for the Tat Days Scholarship fund! The quilts were incredible: one king-size, one baby, two lap-size and another special Elvis-themed lap quilt.


The vending room was filled with threads, tools, trinkets and books galore! It was a veritable lace-making Shangri-la. It didn’t take long for me to exhaust my pocket money, but the opportunity to browse, touch, compare and pet the threads was priceless.
On January 16, 2010, a famous tatter passed away. Mary Konior is world-renowned for her tatting books and her lacework. It is quite safe to say that if you find a circle of tatters working patterns, you will usually find one of Mary’s books.
Sue Hanson flew over from the UK to share a display of Mary’s tatted lace for the last time. The executors of Mrs. Konior’s estate had petitioned the display to be returned so it could be sold at auction. It was bittersweet to see her lace legacy for the first time and know that it was for the last time.
In summary, everyone I met at Tat Days was more wonderful than I could ever have imagined. It was an incredible experience from start to finish and I heartily encourage anyone to attend next year.
Posted by IsDihara at 11:27 AM 7 comments: