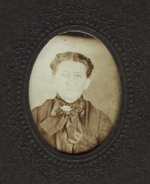 [Image: Margaret Singer DeSmet, 1925]
To say I was born into a crafting family would be to understate the obvious. As did her mother before her (see portrait photo), my grandmother quilted, knit, crocheted, and tatted.

Grandma learned to tat from her older sister Clara, who died of the flu in 1920 at the age of 28. Gram' speaks fondly of Clara's tatting and tells how Clara tatted the whole bodice of her wedding gown. Her last surviving tatted work is a delicate, pink baby bonnet.

"Clara must have been expecting before she caught the flu," Gram' explains, "because she tatted a delicate baby bonnet before she died." For years, Gram' kept the baby bonnet tucked away lovingly in a drawer.

I learned tatting from my grandmother in the early 1980's. Gram' was always working on one fiber arts project or another, but it was the steady clicking of her tatting shuttle and the yards of impossibly fine lace that led me to ask her to show me how.


To this day she insists that I taught myself.

[Image: Genevieve DeSmet Gesin, born 1908]
Gram' is right-handed, you see. Because I'm left-handed I started out thinking that I was uncommon since, according to the only authority on the subject I knew, it wasn't ordinarily possible for a left-handed person to tat. It wouldn't be until many years later, with the help of the Internet, that I would discover that "handedness" was no more of a deterrent in tatting than in any other fiber art.

The fact that no one else in my grandmother's line had yet picked up the art of tatting kept me practicing during those frustrating early days. I recall telling myself over and over, as "the flip" continued to elude my stiff, aching fingers, " this will teach you patience."

When it finally happened I remember being stunned, duplicating "the flip" a few times more to be sure it wasn't a fluke. The rest fell together pretty quickly.

I could wax on (ad nauseum) about each tiny triumph along the way, like learning how to count double stitches, maintain tension, evenly size picots or "shore up" gaps between my rings and chains. The truth is, each time I picked up my shuttle I triumphed over an obstacle. You will too.

Carrying on the tradition is an opportunity to honor the incredible woman that calls me granddaughter and to show my love and respect for her. I am proud to stand among the tatting women in my family and hope to pass the tatting torch on to my descendants, as well as anyone else who wishes to learn.
Posted by IsDihara at 4:22 PM 9 comments: