Happy Boxing Day and a Big Thank You!

As the year winds down, I just wanted to share my gratitude for all the company, kind comments and emails you have contributed in 2009. I am overwhelmed and flattered when people take time out of their busy schedules to read what I write. The dialog is what keeps me actively blogging to share and learn. Hugs to you all!

During a recent shopping outing I found a darling little craft book called Pretty Little Felts - mixed-media crafts to tickle your fancy by Julie Collings. (Can you spot the tatting peeking demurely out of a photo in the author's latest blog post?)

Normally I don't buy craft books unless I am learning a new technique. (Okay, except for tatting books!) But this one had to come home with me.


"To my mother and grandmother who always made beautiful things with their hands."


Amazing photographs stopped me dead in my tracks. Staring back at me, big as life, was tatting! And not just a token smattering here and there. There was even a small doily that incorporated Coronation Cord. This type of cording hasn't been produced since the 1920's.

Call me crazy. I suddenly felt a kinship with this crafty woman. It is part of the reason why I have resolved to create more mixed-media projects with tatting in 2010.

May the new year be brimming with creative possibilities for you.

Happy Boxing Day!
Posted by IsDihara at 9:44 AM 3 comments:

A Tatting Leprechaun for ME? SQUEEEEEEEE! 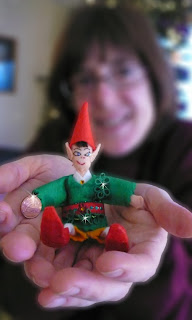 Today's post preempts Tatting Tea Tuesday to bring you news of an unexpected surprise I received in the mail.

Neighborhood News: Begorrah! It's a Leprechaun
By U. Know Who For the News & Messenger

Two weeks ago, high-pitched squeals could be heard emanating from a local residence, according to authorities who were called in to investigate the disturbance.

The gleeful noise caught the attention of several residents, the home owner's two wily hounds and several small dogs around the neighborhood.

"It was like little barking bombs were going off all over the place, " said one neighbor.

"The last time we had anywhere this much commotion was when that Wendlend girl got a car with a big, red bow on it," said an onlooker.

Receiving a package is always cause for celebration at Silly Hat Central. And this time of year parcels have been known to arrive semi-regularly.

But the contents of this package — from Tatskool — was like hitting the jack pot o' gold! In it was my latest order of HDT plus a tantalizing, silver-wrapped gift that gave off a barely perceptible hiccup.

As the parcel made the trip from Ireland, I immediately tore open the wrapping to find...

Ciarrán, latest in a series of emissaries from the Emerald Isle! 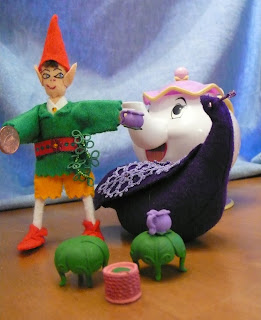 Ciarrán at teatime with new pals.


"Where's the loo?"  he said as he sprang out of the wrapping.

Startled, I showed him to the powder room.

Later I found a crumpled up label inside the mailing envelope. I swear it hadn't been there when I first pulled out the contents. But there it was. And it said, "Not to be opened until Christmas."

It seems Ciarrán, the clever lep, had devised an escape plan during his voyage.

In addition to the boatload of HDT I had ordered, Ciarrán arrived with a skein of Vanilla Sky draped over his shoulder, an Irish coin in his grasp and a twinkle in his eye.

It didn't take long for him to make  himself at home. When he spied my crèche he leaped onto the back of a wise man's camel with an exuberant, "chugainn, ar aghaidh linn!" (Gaelic for Let's go!) and rode it into the kitchen! 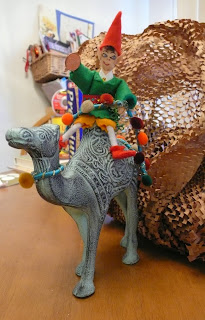 
Hand-picked out of seven applicants by Fergeal, Tatskool's assistant, Ciarrán will supervise my tatting travails and no doubt lead many roguish adventures.

Welcome Ciarrán! I am so excited to have you come live with me!

Now, it would not be an exaggeration to say I have been walking on air since his arrival.

You see, back in July when I first discovered Tatskool's blog and saw Fergeal, I thought, 'what a darling, wee doll.' And then wished for a blog mascot of my own.

Thank goodness I soon realized my ignorant error. Fergeal is no trifling sprite — he's the elfin head of a far-flung family!

From Oisin, the lep' who lives with Tattycat, I learned that Tatskool has been making and giving hand-stitched leprechauns to a few lucky recipients each year.

Her wayward progeny gather as they can to feast, celebrate and cause mischief; often during Tat Days. Reading that, my fascination grew into secret longing.

But life goes on and I reconciled myself to being a happy lurker on It's a Leprechaun's Life. Delightful tales of leprechaun antics dispelled any residual wistful feelings I may have had.

And now I can take Ciarrán to meet up with his bretheren!
Posted by IsDihara at 12:17 AM 12 comments: