Fox is Published in Piecework magazine!

Just got my copy of the March/April issue of Piecework magazine in the mail.

Imagine my delight when I opened it to page 12 to find a tatted edging submitted by none other than Fox in the Trimmings section. She must be so excited!

FYI--I have been to every news stand and bookshop in my area looking for this issue of Piecework magazine and haven't seen one copy. They might not have been delivered yet. The link above lists March 9th as the news stand date.

Keep your eyes peeled and if you spy one, drop everything and flip to page 12 to have a look!
Posted by IsDihara at 7:11 PM 10 comments:

Lion or Lamb? And ♥ for Postie

How did March arrive in your little corner of Tat Land?

Gusting winds mixed with mild sunshine were the order of the day in ce petit coin, rather like a spunky lamb kicking up its heels.

This illustrative cartoon by PBS Stargazer Jack Horkheimer on In Like a Lion and Out Like a Lamb tells the constellatory story behind the old adage.

Whether or not you are a weather watcher, (Say that three times fast.) the early light of Spring is not far off. Lion Winter may not retire quietly, but we may take heart that light is just an equinox away.

Tatting Tea Tuesday
Hot tea has been a steadfast companion these past few days. Today instead of Throat Coat, I sit down with a comforting cuppa Rooibos Vanilla topped off with a splash of chocolate soy milk. Mmmm, so yummy.

Work continues on my ChocoRaspberry nine-sided motif but have decided not to show it until I finish the second round. Test tatting for Heather, the Tarnished Tatter continues too. Can't show you that either, just yet.

What I can show you is an Easter Egg and four goodies that arrived Monday via post. 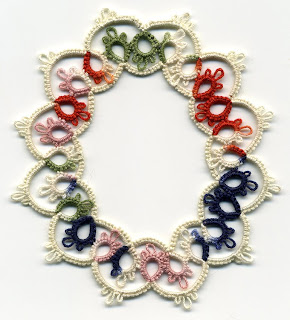 Easter Egg No 5
© 2004 Forleget Akacia
This is Easter Egg No 5 from Tatted Easter Eggs by Kirsten Wind Hansen, published by Forleget Akacia.  It is tatted in two rounds using one shuttle and ball thread. I chose Lizbeth size 40 in Marble (color 121) for the rings and DMC Cordonnet Special size 40 in Ecru for the chains. The finished egg measures 6 cm by 7 cm or approximately 2 ½ by 2 ¾ inches.

Easter Egg No 5 is motif number nine for my 25 motif challenge. Lizbeth Marble (color 121) is a timeless, masculine colorway. Great for projects with bold, classic tones. It was not on my list of threads to buy, but jumped off the shelf and said, "Take me home!"

♥ for Postie
Postie brought lots of wonderful things yesterday. Three goodies from LadyShuttleMaker:
My fingers are itching to try the Treebeard and Brown Gray together, but I must wait until the Omega thread arrives via mail order.

After poring over the butterfly books, I decided I couldn't wait and tatted Twitter last evening in bed. The instructions say it is a good project to use up left over thread on your shuttles. And it is! 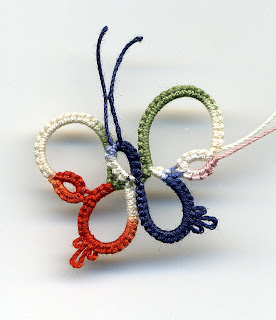 Can you believe this wee flutter is the first butterfly I have ever tatted? So charmed was I that I tossed it on the scanner even before finishing off the ends.

Tatskool showed me her copy a week or so ago during a video chat and I knew immediately that I HAD to have this book for my tatting reference library.

It is a lovingly recorded and well-researched bit of history, with many previously unpublished photos of Elgiva and her work. If you are a collector, this booklet is a must-have for your library.
Posted by IsDihara at 10:05 AM 12 comments:

Bye-bye blustery blizzards! Hello March with your lion-like moods. Roar in so April arrives like a lamb for International Tatting Day (April 1) and Easter (April 4).

Out, Out Bad Tats
The tatting has been a struggle these past few days. Rings won't close, badly tatted-over ends pull out and so on. This slump has had a carpet-bombing effect on my mood which bleeds over into everything else.

Mallard (M45) has lovely teal, purple, tan and ivory shades. I tatted a ring and the thread stretched and broke almost immediately upon closing. It turned out to be decorative spun polyester in size 30. Not at all what I thought I bought. To make matters worse, "size 30" is the equivalent to tatting cotton size 80.

Potty training tantrums from the Sprout are also causing frayed nerves (not to mention extra laundry) at Silly Hat Central. Sprout's negotiating skills have leaped forward and we must be smarter parents to stay a step ahead. Part of me is really proud and part is terrified.

On a brighter note, the fortune in my after-meal cookie said this: A truly creative person rids him or herself of all self-imposed limitations.

Sayonara, slump! I'm tossing you out with the February trash. Need to make room for true creativity.

This coming week I will be watching closely for Postie to bring any of these tantalizing goodies:
This tatting treasure trove certainly adds a rosier glow.
Posted by IsDihara at 7:47 PM 6 comments: