All the Pretty Ponies 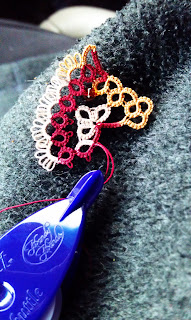 Just had to post again to say thank you to Marilee Rockley and Sharren Morgan for crafting the perfect headline for yesterday's post (much better than the one I chose, which expressed an underlying tone of angst).

And to share today's pony, tatted in the car.  This is tatted in Lizbeth® 40 Autumn Apple Pie #169.
I had plenty of time to finish this pretty pony, but no paperclip. So it will be finished at home later tonight.

I will also try to share a "herd" photo.

These horses are tatted using Ineke Kuiperij's Horse pattern from her Chess Set booklet (on a paperclip). The booklets are available for purchase from Riet Surtel-Smeulders.

Earlier this fall, I saw a Yahoo tatting group post from Riet over at Bengelblog called "Horsing Around with Ineke's Paard." The linked PDF file credited Bobbie Demmer with showing a horse to Katharine Buckner, Pam Freck and Riet at the end of 2011 Tat Days.  Today when I looking in the Yahoo group files, I did not see the 'Paard' file.  It might have been taken down because it had gotten corrupted.

Thank you to everyone for all the wonderful comments!  They help me so much to keep a caring perspective about this art form and not give in to petty thoughts and pressures.


AUGH!  Instead of working on my Gingerbread Boy, I have been tatting more horses on paperclips.  In addition to the first one, I have completed #2 in Lizbeth® 40 Pink Cocoa #166 and #3 in blue and taupe HDT from Shuttle Lab Trends  (size 20, I think).

Here is a photo of the thread.  I have lost the label, so I don't know the name or the size.  AUGH!  Hope Bates created it...by any chance, could Hope -- or another reader -- fill in the blanks?

Just as I was hiding the ends on horse #3 I get a call from my LYS asking about Lizbeth® threads. The shop owner was placing an order before leaving for holiday break. What threads did I want to have on hand for the January tat-along?

I responded, "Any size 20 variegated thread that looks vaguely "horsey."

Even though I am sure someone will want to tat "Black Beauty," I asked not to have black on hand.  It is simply too hard on the eyes unless tatting under a very bright light.  Shop lights are good, but not bright enough for black thread.

Après moi, le déluge
And then the shop owner dropped the bomb...could I tat up more samples?

Shouldn't I be completing projects (Gingerbread Boy, felt partridge, heart to send to JB) already in progress rather than starting something new?

CrazyMom suggested that the shop owner (who both needle and shuttle tats) create the additional samples herself.  What a wonderful suggestion.

But I opened my mouth and out came the words, "Well, these don't take very long to make, I can make another one for you in Autumn Apple Pie."  AUGH!

So, horse #4 is in progress using Lizbeth® Autumn Apple Pie. I am sure that Lizbeth® Sea Shells will also make a pretty, pretty, paperclip pony. And Lizbeth® Pink Cocoa is the stuff of little girls' dreams.

It's a good thing we have so many scrumptious threads to choose from, with hand-dyed threads on the top of this Unrepentant Thread Junky's list, followed by drawers of lovely Lizbeth®.
Posted by IsDihara at 10:36 AM 19 comments: