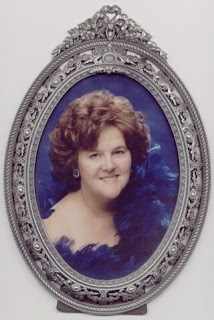 Congratulations to Georgia Seitz for championing the tatting cause and exemplifying the qualities most admired by her peers through action, support and published works. Ms. Seitz is a national treasure.

It gives me great pleasure to announce Georgia as the recipient of this year's award. She has inspired and encouraged, taught and touched tatters for 30 years.

Georgia continues to bring about positive change with the online tatting class — 2010 is its 11th year in session — teaching at local lace guilds and IOLI conventions, and helping to raise scholarship funds at Tat Days.

Hundreds of lacers have been influenced by Georgia and her teachings. But she would be the first to tell you that all of the tatting events online are a group effort and not a one-tatter show. (See her comment below.)

When the call for nominations went out in June 2009, it was apparent almost immediately that Georgia was first choice in many minds. What wasn't clear until later was that the polling would be unanimous.

One voter wrote in, "As much as I would like to nominate myself...I have been fortunate to experience her style of teaching...Georgia (Seitz) gets my vote."

Half a dozen voters commented about the vivacity Georgia brings to tatting classes and events. Her presence at a tatting event 'always makes for a very merry, laughter-filled' occasion.

Georgia Seitz's first nationally published patterns appeared in Piecework, Vol. 1 No. 3 Nov-Dec 1993. She has also been one of the tatting editors for the Belgian Lace School's International Lace Magazine.

She began with an interest in lacemaking which had her collecting lace pieces for years. In the early '70's she began seeking tatted lace almost exclusively. Since 1979 she has been tatting and teaching.

In 1985, Georgia took up a new challenge. During that summer, she was listening to the CBS Evening News when she heard Charles Kuralt give a report from "On The Road". Charles was interviewing a number of old ladies from the Midwest who tatted lace. At the end of the interview Charles said that when these ladies died, so would tatting. Georgia sat down right then and sent off a telegram to Charles telling him that "Tatting is alive and well and thriving in Alaska!"

She has exhibited or judged tatted lace at the Alaska State fair often and has five times been recognized as Division Champion in Tatting at the Fur-Rondy (1988, 1989, twice in 1991 and 1993). After ten years of trying she finally received a Grand Championship Purple Rosette at the 1996 Alaska State Fair for a doily with a beaded tatted edging. Unfortunately, the category was not "Tatting", but "Other." 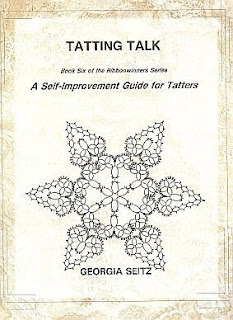 Undaunted, Georgia continues to teach,  write and publish a series of books on tatting, entitled Ribbonwinners.

She operates her own mail order business for publishing pattern books and tatting shuttle manufacturing.  And in her own words, "I have loved every minute of it."

Please join me in congratulating Georgia Seitz and thanking her for her unwavering support!

Editor's Note: Thank you, Georgia, for sharing information from speeches, bios and other published materials to compile this award feature. All images are reprinted with the permission of Georgia Seitz.


The National Treasure award is given by nomination to tatters for their dedication and support of the art form around the globe. The award recognizes individuals who go above and beyond in their efforts to further the art of tatting through their contributions, and who exemplify (through action) excellence by expanding tatting boundaries or otherwise perpetuating the art.

Nominations will be awarded annually or as often as nominations permit. Calls for nomination will be posted four times each year as a reminder.
Posted by IsDihara at 11:36 AM 25 comments: 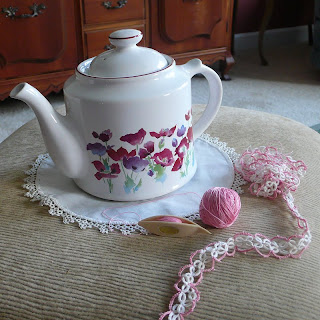 Take one last look back at Tatting Tea Tuesday before we kiss 2009 and the aughts goodbye.

This photo has come to symbolize Tatting Tea Tuesday for me.  My favorite teapot. Yards of pretty edging and a lovely doily.

But what if THIS had been my favorite teapot?
I know it's supposed to be all Jules Verne goes gasket-y, but I still get a slight "I dream of Jeannie" vibe off it.

Tatting Tea Tuesday kicked off on June 2, with the posting of Chantilly Border edging from the May/June issue of Piecework magazine. I keep losing count as I scroll through the posts, but my best guess-timate is 20 published out of 31 possible posts. And you joined me for most of them, so hat's off  & big applause to you!

Along the way, you have shared my growing pains, successes, small peeks into life raising the smartest, most adorable, rough-and-tumble toddler a mother could ever hope to have, and born witness to my burgeoning addiction to hand-dyed thread.

Many personal milestones were achieved through TTT. My first successful snowflake, the completion of the partridge ornament project and my first blog giveaway.

But most of all, Tatting Tea Tuesday opened a window into Tat Land where I found cherished new friends and was gifted with a lucky leprechaun named Ciarrán.

Thank you so much for contributing to Tatting Tea Tuesday in 2009. Your participation molded it into the fun communi-tea it has grown to be.

I have enjoyed every minute of the journey these past five months. Even more so because your contributions made it richer and more vibrant than I ever expected.

Should Tatting Tea Tuesday continue in 2010?
Cast your vote in the blog poll at the top of this post.

NEXT:  A Ribbonwinner Comes to Tea
Posted by IsDihara at 3:19 PM 11 comments: