THIS POST was written in 2009 but it sat in my draft folder until today.  Now I am looking for the UFO and the Irish Crochet clovers that were made for this project.

The first bit of tatting I have done in over a week is this:

Boy did it feel good to get the half-hitches flowing again!

Note to the Occassional Tatter - Once you get into a daily tatting habit, it is surprising how much the tatting zen fulfills you. Try it. You'll be glad you did.

Even though my tatting "must do" list is overly long, I decided to try a technique that Martha Ess and TattingChic worked out in May 2009 -- Double Core SSSR with Two Colours 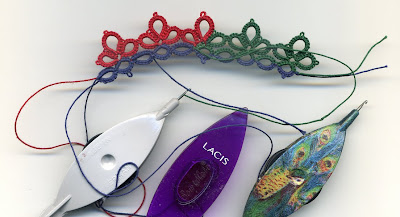 This technique is perfect for tatting Mindy Al-Aaraji's Clover Motif © 2003 in three colors. Either two or three, I'm still waffling. But probably three.

I even convinced my twin sister, whose lace crochet work has been published in magazines, to create the Irish Crochet clover centers for me. Big win!

If you have sisters you probably won't understand why this was a huge win. Your sisters (I'm betting) would grant your crafty requests without batting an eye. Mine refuses, so I took it as a green-lit SIGN from God, the Universe and Everything.

Naturally, she said I needed to make these myself "because they were so easy" to do. Heh, I haven't used a crochet hook to do anything besides hide knitted ends or join picots since 1977. My feeble attempts would derail this project and probably make a leprechaun angry.

Since I have one of those close by, I dared not risk it!

Here are her gorgeous clovers:


Remember to make tatting a part of your life every day!
Posted by IsDihara at 8:41 AM 5 comments: