Precious little tatting to report this week. Late-winter/early-spring viruses and allergies kept the whole family down in varying degrees.  As for me, allergy-onset + a 24-hour vomiting spell = several days lost productivity.

Sprout went to a girl's birthday party last weekend which had a kitten adoption theme, so he came home with a blue beanie-kitten, a crafty ball of yarn, a plastic mouse toy and Swedish Fish candy as take-away goodies.

So I decided to follow Fox's lead (see her links from March1: Jivin' with Jan and March 7: Delightful Doilies Dominate) and begin with part one of Doily VI from Tatted Treasures by Jan Stawasz,

Lace-lovin' Librarian Diane gets credit too, as her lacework (February 24: Doily VI, Round 1 and March 18: Round V...done!) inspired Fox.  Bravo ladies for enabling me so successfully.  LOL!


For some strange reason I thought that the central motif from Jan Stawasz' Doily VI was published sans stitch counts. (Indeed, the motif in my copy of his first book omits them.)

After a few days I got wise and double checked both Stawasz books to discover that book two does include stitch counts. Mine are not at all close to his!

Sprout insists Wilbur's bed be lined, padded, decorated with tatting (the kid thinks big, doesn't he?) and have a door. I'm hoping this version of the motif will work as an inner round.

How to Catch a Leprechaun

Yesterday was a snow day so I had Sprout home with me. We colored a pot o' gold, shamrocks and told each other tales of leprechaun mischief. Before long he decided it was time to build a leprechaun trap!


We agreed to stage these trap photos using Ciarrán before actually setting the trap. (Yes, that is a light saber toy in the background.) 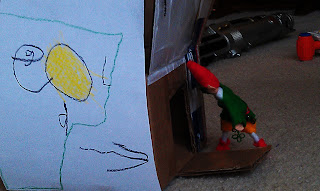 Note the yellow "o" made to look like a gold coin and the big arrow pointing toward the entrance.  He asked me how to spell gold and thought I had said "e" instead of "g," but promptly corrected his error. He is still perfecting his spacing (runs out of room for all of his letters) but I love it all! 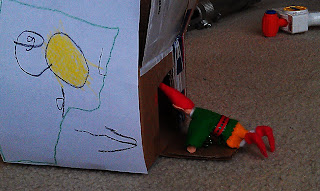 At periodic intervals Sprout would "hear a sound" and rush to examine his trap. Surely he would find a captured pixie!  Here he is peering in to see what he had caught... 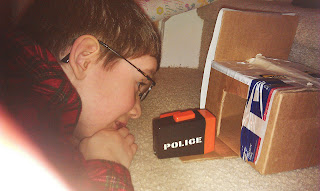 He had placed a pirate doubloon inside the box as well as a hand-drawn shamrock as bait.  Sadly, no leprechauns fell prey to his ingenious trap. But all in all, it was great snow day fun!