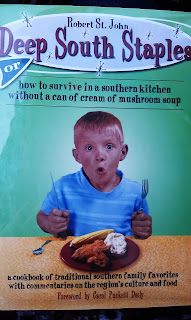 Oh Sweet Mercy!  Have I chuckled a hearty chuckle while reading this cookbook.

Growing up north of the Mason-Dixon Line*,  I am often surprised and amazed by colorful Southern sayings. They are an endless fascination for me and I mean no disrespect whatsoever. Truly.

For example, I heard this said the other day while waiting outside of The Sprout's school.

Tennessee mom said, "Anyone who's ever had their heart blessed knows how true that is...."

BAM! Just like that I was confused. It took me the better part of 15 minutes of silent reflection before enlightenment finally came.

'Is this a twist on the "Bless your heart" comment?' I thought to myself.

But by then I had lost the thread of the conversation and couldn't test my hypothesis in context.  I still don't know what "anyone who's ever had their heart blessed" means.

But enough of the exasperating example. Let's get back to the cookbook.

Published in 2006, the author states that the recipes included were traditional preparations of the Deep South that were handed down from grandmothers and great-grandmothers. They were often written on the backs of old cancelled checks, notepads, garden club programs or church bulletins.

Chapters are organized by occasion: Cocktail Parties, Funeral Food, then Breakfast, Salad and Soup and a grin-inducing essay on Vienna Sausages.  Main Courses follows with an essay entitled, "The Great Possum Predicament."  All chapters are peppered with cooking tips.

As you may well have surmised, it is the cooking tips and essays that had me giggling.

There is a separate essay on sweet tea!  In it the author explains how the tea gets sweeter as you travel deeper into the South. That rule works for women too, he writes.

I imagine a few readers may be nodding their heads in agreement.  The following short passage had me laughing out loud:

I hate sun tea. It's a scam. I imagine sun tea drinkers also are dog beaters and jaywalkers. Sun tea is weak. [...passage snipped for brevity...] The same guy who invented the Pet Rock invented the sun tea jar.  He was a dog beater.

[...snipped again...] Don't beat your dog for fear that someone will call you a sun tea drinker...

This cookbook was a perfect choice for riding out Hurricane-turned-Superstorm Sandy. Cabin fever?  Not me.  I had good food, tatting and this anecdote-rich tome to dispel cooped-up feelings.

Luckily, we never lost power and suffered no wind damage.  We came through unscathed. Plus, my amusement meter reached level 10 at various points throughout the storm.

And a reward for those who read all the way to the bottom:
Funny Southern Sayings - Meaning of Southern Expressions

I may never completely understand Southern expressions, but the journey is never boring.

* the demarcation line representing a cultural boundary between Northeastern (Yankee) and Southern (Dixie) United States
Posted by IsDihara at 11:23 AM 8 comments:

Now that the Halloween candy-fest is past, it is time to scare up some après-ghoul tatting.

And just so we all remember, in a later post Tatskool shared that one of her tatting lassies found a discrepancy in the pattern.  Read all about it here:  More About the Gingerbread Boy

Jeff Hamilton (Bridge City Tatting) shared his 2009 Gingerbread Boy and it looks FAB (even though he says he made a mistake or two with the pattern) in a solid brown:  Gina's Gingerbread Boy

Miranda (Tatting Fool) shared her Gingerbread Boys earlier this year, shortly after our beloved Gina's death.  Two delicious tatting treats, one with white icing and the other with green.

If you are interested in joining a Gingerbread Boy Tat-Along, leave a note in the comments.  I will make a list and start watching your blog (if you have one).  No worries if you don't have a blog.  You can still join in!
Posted by IsDihara at 1:58 PM 10 comments: