Going dark, y'all. Time to pack up the laptop for travel. In 12 hours I will be in Cornelia, GA, settling in to a hotel and preparing to take in my first Tat Days conference in nearby Toccoa, GA.

This is gonna be good!
Posted by IsDihara at 8:03 PM 5 comments:

Gettin' Back to Bee?

Having heard of quilting, spelling and even JuJu bees, I have often wondered if the day would ever come when tatting would get a bee of its own.

A bee is essentially a gathering, to make an otherwise unwieldy task or project more manageable.


"...a gathering of peers to accomplish a task or to hold a competition. Especially in the past, the tasks were often major jobs, such as clearing a field of timber or raising a barn, that would be difficult to carry out alone. It was often both a social and utilitarian event. Jobs like corn husking or sewing, could be done as a group to allow socialization during an otherwise tedious chore. Such bees often included refreshments and entertainment provided by the group."

Of course it is immediately plain why bees aren't common in tatting. Typically there haven't been enough of us living in close proximity to gather.

Tatters are the control group, the experts, the epitome of the "think global, craft local" movement.


Are Tats Days the new Bees?
Consider the Palmetto Tatting Guild, the Fringe Element Tatters, the Finger Lakes or Shuttlebirds tatting guilds. They each have enough members to organize an annual Tat Days conference.

Then there are the Mad Tatters and Oklahoma Shuttle Bugs in Tennessee, Mobile Tatters in Alabama, and the Timp Tatters in Utah, among many other lace guilds that include tatters in their ranks.

And last but never least, the Danish Tatting Guild, the Ring of Tatters in the UK and the Tatting Guild of New South Wales in Australia just to name a few of the global guilds!

Might it be time for larger tatting groups to get their bee on?

Dare I dream of a trickle down effect to smaller groups should such an idea take root?


It certainly seems to me that a large project, such as the crazy quilt project Georgia Seitz and others organized as a 2010 Palmetto Tat Days fund-raiser, would be an ideal bee project.

While I'm ruminating on the subject, why aren't "sheep to shawl" competitions lumped into the bee category? They certainly fit the bill.

Should working bees, like the once popular barn-raising, corn-husking, cider pressing and quilting gatherings of yore, continue to keep company with other ghosts of our American heritage?

I leave you to gather your thoughts with this poem I found on the Internet. It is written for quilters but applies to tatters equally well. Substitute "quilting" with "tatting" and you'll see what I mean:

THE QUILTIN’ TIMES ARE A-CHANGING
by CindyThury Smith 1999

For our Great-Great Grandmothers,
in quilting times past—
A frugal quilter had to scrimp, make every scrap last—
Today wasting fabric is not such a crime—
Today what’s scarce is a quilter’s TIME.
Patterns used to travel with pioneers going west—
Now we swap and share instantly on the Internet—
Once templates were traced, fabric carefully scissored—
Now we slice multiple layers, we’re all Olfa wizards.

Like our Great-Great Grandmothers our lives are busy, we’re stressed—
But with the beauty of our quilts, we feel we are blessed—

As with Great-Great Grandmother, our quilting serves many goals—
To give warmth, grace our homes, and feed our souls.

Mary Konior's Queen of Hearts
All threads are size 40 Lizbeth
All three hearts are charming in their own right. And yet...

My July 27th post stated I wasn't sure how shoe-lace-tricking my way right-and-left-grand style through the rings affected the color flow. 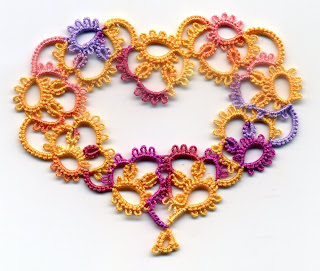 Switching threads to alternate rings mixed things up in an intriguing way, but the effect got lost. You really have to scrutinize to see that every other ring is a solid orange.

Look again - variegated rings are surrounded by solid chains and vice verse. This is an appealing effect, but two solid colors are needed to really show it off. 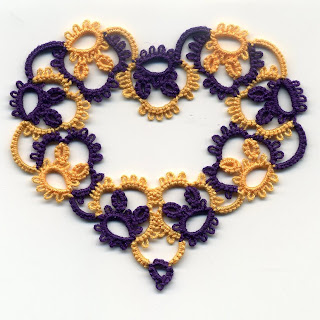 See how the stripes leap off the screen? The contrasting waves of color make this a winner.

Heart 3 surrounds colorful rings with solid chains. To me, the variegated rings add more visual interest than solid ones. (Not that there is anything wrong with solid ones.) The purple chains hug the graceful curves of the design and compliment the Fruit Fizz.

Does this create a stained glass effect? 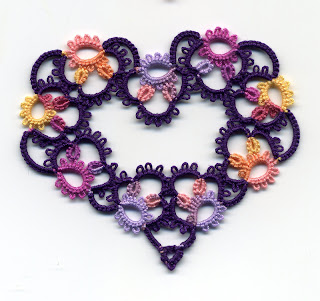 Not quite, because the dark chains do not completely outline the bright rings. They Allemande Left around the rings instead.

Last but not least is Heart 2. Tatted with Fruit Fizz on two continuously-wound shuttles and tatted according to pattern specs. It might not be as flashy as the previous two, but it is so pretty! 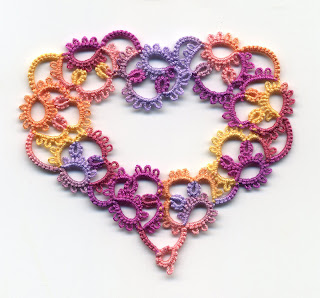 If the color distracts from the design (some would say yes, some would say no), I would still choose to tat this again and again.


My three-way analysis turned into a four-way analysis. And in answering my first questions I came up with a few more. But look at all that I learned (and you too) from this little experiment with color.

Thank you to Mary Konior, God rest her soul, for designing this versatile and always lovely heart.

This will be my last post before leaving on Thursday morning (before the sun rises) to catch a plane to Toccoa, GA, for Tat Days. But I am taking my camera and laptop so I can (cross your fingers) deliver at least one live update from there.