Well, aren't I God's own fool for promising a Tatting Tea Tuesday post and not delivering until the end of the week?

Last weekend the tatting got finished (and the tea got drunk), but the steam-set of the lace didn't happen until Tuesday evening. Tuesday and Wednesday were gorgeous sunny days so we went outside to enjoy them. Excuses, excuses... 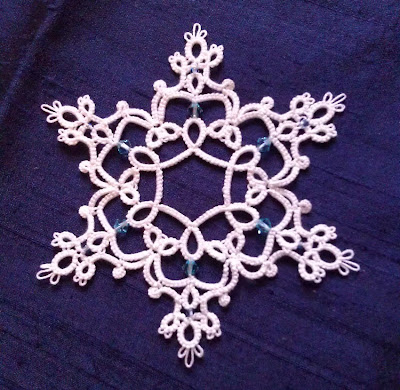 Jeff Hamilton, is this the project you commented "looks suspiciously like the snowflake I hope to tat really soon?"

My first snowflake for a 2012 Christmas tree charity project for the Piedmont Lace Guild of Virginia turned out pretty well. (White lace is such a challenge to photograph!)

If only my scanner would get over its bad self and start talking to the wireless network again.

Gossip Alert
Have you seen the Custom/Commemorative shuttle La Cossette has up in her shop? You might recognize the image...La Cossette - Etsy Made to Order
Posted by IsDihara at 11:24 AM 11 comments: