WOW--I just received my July/August 2010 issue of Piecework magazine and was thrilled to see the gorgeous tatting entries that made the winners circle.

Congratulations to all the winners! It makes me so proud to see tatting holding its own in this competition.

Three tatted entries were judged ribbon winners, including a heart-stopping celtic design adapted from Rozella F. Linden's book, "Celtic Tatting - Knots & Patterns." The celtic heart was called "Open Heart" and was created by a lady in New Mexico. It received an honorable mention. It is a stunning, beautifully crafted heart!

A brilliant charmer of a tatted Valentine heart won honorable mention for a lady in Colorado. It was a classy, elegant Valentine that would melt the heart of any recipient. If the pattern is available I would tat it in a heartbeat!

The 2010 Grand Prize was awarded to a lady in Pennsylvania who submitted a tapestry crochet heart that she called "Coeur de Couleur." It is a gorgeous, gorgeous heart!

First Prize in the Lacemaking/Tatting category was awarded to a lady in New Jersey who created a tatted wedding ornament, named "The Bride's Sixpence." It was tatted using leftover silk thread purchased in 1964 for a wedding gown. It is the prettiest "something old, something new, something borrowed, something blue" a bride could hope to receive.

I could go on gushing praises, but really, you should see these entries for yourself. It is worth the trip to the bookstore or where ever you find copies of Interweave Press magazines. Go, go now.
Posted by IsDihara at 6:25 PM 11 comments:

As the mercury hits MUGGY at Silly Hat Central, hay fever has gotten the best of me. Imagine me all hopped up on antihistamines. Don't think I will venture out to meet the stitching ladies. So I turned my usual sore throat remedy into a lemon-ginger tea-time soother and fired up the blog. 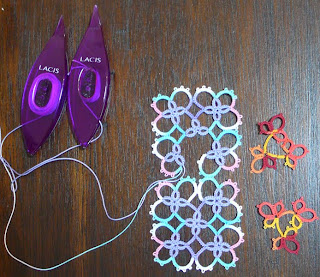 The Summer Fun bookmark progresses with motif #2 nearly complete. Tatted in two colors, size 20 Lizbeth #104 and #642, each motif measures 2 by 2 inches (5.1 by 5.1 centimeters). Three of these joined in a row would make a lovely bookmark. I also think this motif begs for bling.

This week I joined Fox's thread exchange and sent off (so far) three envelopes with thread samples. It is fun to browse the thread offerings of other tatters and swap for something you like! 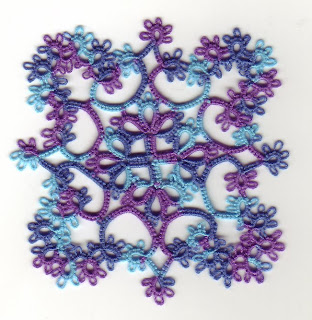 Snowflake #9, tatted by Kendra Goodnow,
from Festive Snowflakes & Ornaments
edited by Barbara Foster
Barbara Foster sent me this photo of a square motif tatted in her soon-to-be-released Lizbeth size 80. This color is #122 Caribbean. What a coincidence! It is the same motif I have started but not yet finished. So now I can show you something a bit larger than the snippets from last week's post.

Finished up the treble clefs I was tatting for a friend's wedding and have the mailing envelope ready to drop off with postie. These clefs have spoiled me rotten! No hiding ends at the beginning. No CTM. Just measure off roughly 32-34 cm. from shuttle 1 and tat the first ring. Then I would tie on shuttle two to the dangling thread and voila! I was ready to tat through to the final ring.  A quick, instant gratification project with minimal thread ends to hide....*sigh*

No progress on the county fair doily. The tatting fugue seems to have passed (Hope I haven't just jinx myself.) so it may be safe to start row 5.
Posted by IsDihara at 6:57 PM 4 comments: