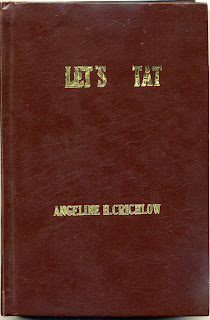 Thanks for telling me what you want to know about Angeline H. Crichlow's self-published book, Let's Tat!


Q: Who was Angeline H. Crichlow?

A: Okay, I admit, nobody asked that question. I just wanted to share a photo and some information about this lovely woman. This is the write-up I posted several years ago on my (now defunct) web site. It was originally submitted by Georgia Seitz:

Angeline Crichlow was an inspirational tatter. She was also a wonderful tatting designer and author of many tatting books.


Angeline lived in Carmichael, CA and was the fourth generation in a family of tatters. Sadly, she died in 1997.


In her hard cover book, Let's Tat, she tells of watching her mother tat and hearing tales of her great grandmother Margaret Robinson (1827-1890) tatting. Margaret Robinson was an immigrant of Ireland into San Francisco in 1854.


Some of Mrs. Crichlow's books are still available from her daughter Jeani Crichlow-Weick.


Although it is now out of print, Angeline's hardback book Let's Tat, is a must have. Let's all encourage Jeani to reprint it for the next generation of tatters.

Q: How did I acquire this book?

A: It all started with a comment made in Georgia Seitz' online tat class about how Angeline Crichlow was an inspirational tatter. Then I followed this reviewer's (Hope) sage advice.

In the back of my copy, which is kept wedged between books because the cover goes soft and curly in humidity- is an email... and I know AKTATTER was blessed with knowing in person this lovely lady!!! because the letter tells of Georgia's learning to tat in 1979 in Sacramento California.


I still have the check where I ordered my books because she endorsed it.. have one of her volumes of poetry.. and adore this book ...and I feel so blessed to not only have the book & 5 of her small ones, but the memory of talking to her on the phone & a letter from her.


"Let's Tat!" is 352 pages, hard bound- and more special- printed and hand bound by a beloved tatter who wanted to share tatting with everyone. It is b-n-w with very good photos of the tatting, I was constantly amazed at all the techniques that she teaches and for me it was a book that I "read" practically from cover to cover- because it was so much fun. It was delightful because of her descriptions of the patterns- where they came from- and often memories that they evoked.


Page 91 is a particular favorite- Centipede Edging... the story about it is precious- taking us back to pioneer times & wagon travel. Her mother called it Centipede Edging- and Angeline was so fearful of centipedes that it was quite unpleasant to think about having this edging on her own clothing. This book is like a recorded history of tatting. If you can ever borrow one and spend time just reading it for pleasure - don't hesitate. and if you find a copy somewhere for sale- don't hesitate- BUY IT!!


So I bought my copy of Let's Tat from a seller on eBay. (And I paid a pretty penny for it too. But it is worth it. This book is a real treasure!)

Q: What more can I learn about this book?

A: In her July 1990 newsletter (TATtle TALES) Teri Dusenbury listed this book in her Top 10 Book Shelf Picks:

9. Angeline Crichlow's Let's Tat. A Books Publications. 1981 A wonderful book comprised of 5 generations of tatting women and the designs that they tatted in a one-hundred-year span. (Out of Print)

Just as an FYI--the Dayton Metro Library system lists this book in its networked libraries, namely the Burkhardt Library. If you live in or around Dayton, Ohio, or Burkhardt, check it out!

Lace-lovin' Librarian, would you be able to request it through Inter-Library Loan?

This was all I was able to find about this book online. (Thank you, Internet Creators, for making information so readily available and bringing us closer together. What did we ever do before you?)

Just one last thought on this topic before I close. Every time I review the information I have about Angeline H. Crichlow or flip through her book, my heart feels like it grows three-sizes bigger (kind of a Grinch-y comparison, but it works). That's how I know she is a National Treasure.

I think to myself, "Some day when I'm gone, I hope someone thinks of me this way." By 'this way' I mean with reverence for her legacy and kindness, and gladness that she was here on this Earth. There is no greater gift than to know that you mattered.

(If anyone is still reading, I want to be remembered like Edgar Allen Poe's mysterious midnight visitor. For details, read Oh Poe, How I Do Adore Thee.)

Come to think of it, that might be an awesome name for a custom-dyed thread.  (Hint, hint.) 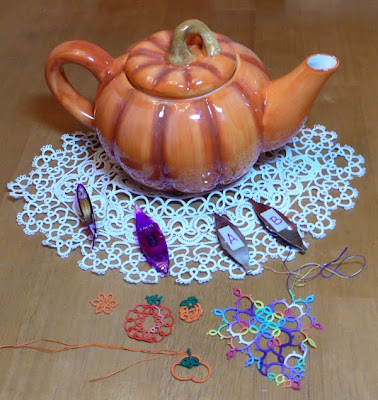 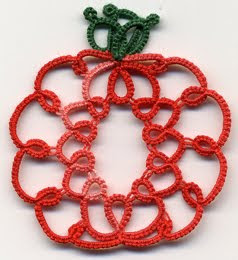 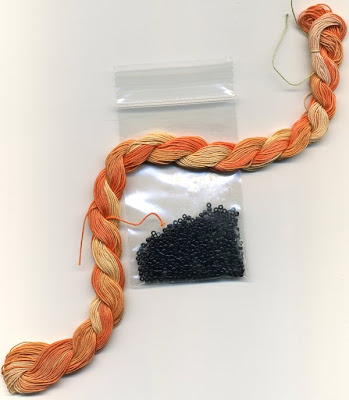 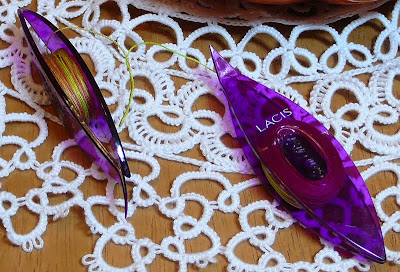 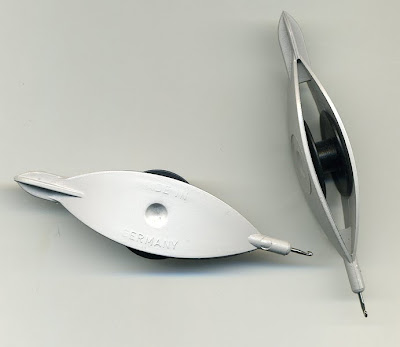 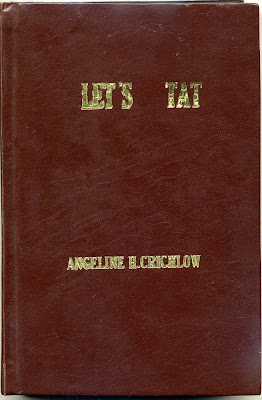 And just so you don't think ill of unrepentent thread junkies in general (or me in particular) I was not completely greedy. I promised to share my copy of Let's Tat by Angeline H. Crichlow and The Tatted Artistry of Teiko Fujito (Lacis Publications) with Bonnie when I see her on Sunday, October 25.
More later, tatting friends! The hour is late and my eyelids droop. Want to know more about the tome pictured above? Ask and I will answer. (in my next post) Now it is off to bed with me.
As Fox so eloquently puts it . . . "Anon"
Posted by IsDihara at 4:05 AM 11 comments: 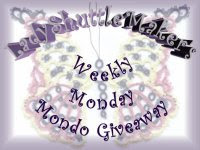 Each week the prizes get more enticing, and it couldn't be easier to enter. So what are you waiting for?
Head on over to LadyShuttleMaker's blog and enter for your chance (or chances) to win!
Oh, and reading the rules is a good idea too, because there are ways you can increase your chances of winning. (None of them too strenuous either.)
Now go, and good Luck!
Posted by IsDihara at 7:41 PM No comments:

[Image Source: Philadelphia Museum of Art]
This painting by Pierre August Renoir currently resides in the Philadelphia Museum of Art.
The shuttle is small enough to be a tatting shuttle, yet, something about the way Renoir's subject is holding her hands makes me wonder. Is she tatting? Could she be knotting instead?
One of my favorite of Georgia Seitz' many memorable quotes is, "As many tatters as there are . . . that's how many ways there are to tat."
So I ask you. Perhaps you tat in a way that is similar to the method employed by the lass in this painting.
Georgia even narrates a wonderful teaser video for Palmetto Tatters called "Tatting Hands" in which she says these very words. It is a wonderful video. Look at all the different ways tatting is accomplished.
How do you hold the thread in your loom hand? Do you use your thumb and middle finger for "the pinch?" (I don't.) Could she be making a chain?
What do you think?
Posted by IsDihara at 2:00 AM 10 comments: