Ever have a Microbe Named After You?

I am learning about naming microbes and have been given my own!  *drumroll*

No, no, no! I was not diagnosed with a scary-sounding disease.

Instead of enjoying Tatting Tea Tuesday, I went to see my doctor yesterday. He prescribed antibiotics to treat a nasty infection. Take that, bad bacteria!

By evening time I was starting to feel much better. So I thought I would read tatting blogs. Late-night blog surfing blended one link into another, and well...

My brain took off on a wild, roller coaster ride of rapid-fire synapses.

It started with Krystledawne's clever post about a proposed new word for the tatting lexicon -- gotatsic.

As I clicked happily away from blog to blog, my brain was percolating, making mad leaps of logic...

The catalyst was an innocent reference in Lace-lovin' Librarian Diane's blog post. There she was, innocently sharing her lovely Primrose Path doily and the even lovelier surprise her husband made for her.

Diane wrote of never going down into her basement. And my crazy brain set upon wondering what weird things could be lurking down there.

Leap-frogging over shadows and past strange eyes peering out from dark corners, it landed on the idea of a menacing bacteria.

That is how the idea of filaria was born.(filum being the latin word for thread and fila being its plural form) And that led to necrotizing filitis. Or thread-eating bacteria.

Of course, I do not speak latin nor have I studied one whit of medicine, so this could be complete nonsense. But the term necrotizing fasciitis (flesh-eating bacteria) is a misnomer so there is room for creative license in naming destructive micro-organisms. What do you all think?

Is there room for a thread-eating microbe in Tat Land?

Do you think Martha Ess might be persuaded to design a tatted microbe to represent it? She is the mastermind behind the tatted brain and the tatted representation of brain cell #3.

And if you think this idea is too weird, just take a look at these Giant Microbes.

I'm just getting warmed up.

Once you have "caught" it, report to a quarantine area. [Really a mini-workshop - pick up a pattern and/or come back at the designated time for a lesson.)

Of course, you could be a "carrier" and give it to someone else...

The game could be called Tathogen.

It could be positively pandemic.
Posted by IsDihara at 12:17 PM 9 comments:

This is a test.

In voluntary cooperation with tatting authorities, today's message was posted to keep you informed in the event of an emergency. If this had been an actual emergency, the image above would be followed by official information, news or instructions.

This concludes this test of the Emergency Tatcast System.
Posted by IsDihara at 10:08 AM 2 comments: 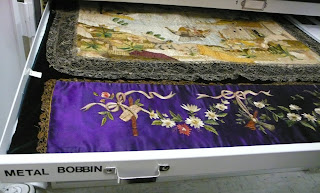 Last Thursday I attended a behind-the-scenes lace tour at the Smithsonian Institution's Museum of American History. If you are interested in tatting and bobbin laces, this tour is well worth your time. 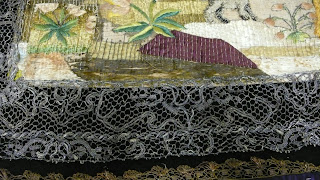 It was also Earth Day, so the Mall was bustling with activity. Wish I had snapped a photo of the rally. Activists holding whale tails and picket signs marched alongside Greenpeace staffers sweltering in full-body whale suits. You can see photos of them here:) 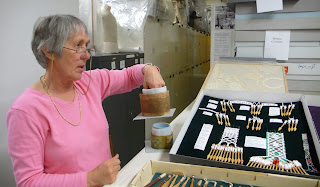 Volunteer Karen Thompson led the two-hour lace tour. Besides being marvelous, warm and patient, her love of lace epitomizes why we were all there. She was a font of knowledge with a clear passion for preserving handmade laces. 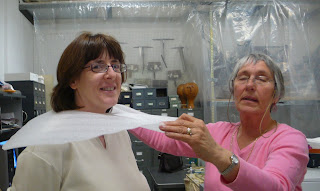 Here she is talking about lace ruffs. Actual lace ruffs were heavily starched or supported with boning. The goofy-looking model is yours truly. 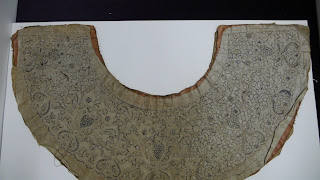 Karen Thompson also teaches museum visitors to make lace each week from 1:00 to 2:00 p.m. with one other volunteer instructor. 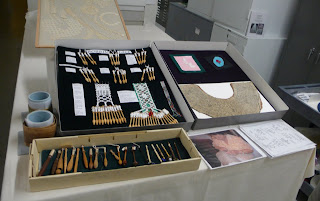 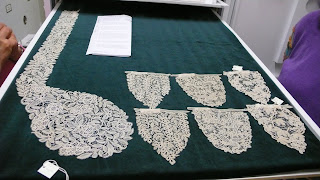 How did I hear about this backroom lace tour? Karen Thomspon's article in Piece Work magazine (July/August 2009) first tipped me off, but Shirley Hays' blog post (Shade Tree Art) with photos of tatting sealed the deal.

There was one bulletin-style board pinned full of tatting on display for the tour. My photos suffer from a bit of motion blur from holding the camera high above my head and tripping the shutter. 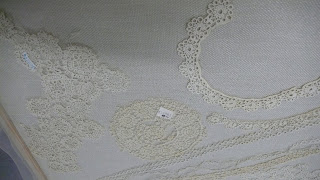 My intention was to take one overall shot and use PhotoShop to crop close-ups. The motion blur wrecks that plan. But you can still see enough of the lace to get a pretty good idea of the fine threads used and method of attaching individual motifs into larger shapes. 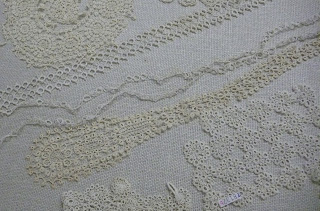 Karen Thompson told me that there was more tatting in the collection. Perhaps future tatters can ask to see some of the pieces in the storage drawers.

The tour is limited to eight persons.

Planning a trip to the nation's capitol? Call ahead and reserve your spot for the lace tour.

Many more photos of the lace tour, plus a few from the Ipswitch exhibit can be viewed from Orla's Flikr account.  Thank you, Orla for hosting them all!

MORE TO COME! Watch for the Bayeux Tapestry made in lace, black Chantilly lace and more.
Posted by IsDihara at 12:36 PM 7 comments: