With two unfinished snowflakes and a list of "wanna tats" two (or more) arm-lengths long, shouldn't I be completing projects already in progress rather than starting something new? Apparently not, according to my inner tatter, who has been throwing "startitus" tantrums for days.

When the two hounds' leash-yanking antics threw out my lower back, I relented. Big Daddy was home yesterday due to the holiday weekend in the US, so I tatted from bed off and on throughout the day. We all know tatting is the best medicine! 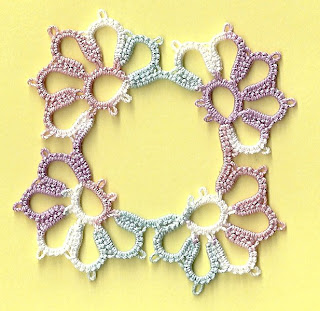 Mary Konior's Anniversary Motif from page 80 of Tatting with Visual Patterns was the first piece of "bad back tatting." It is a pretty bit of posy repetition that can be tatted with shuttle and ball. Mine is made in Lizbeth®20 Country Kitchen. 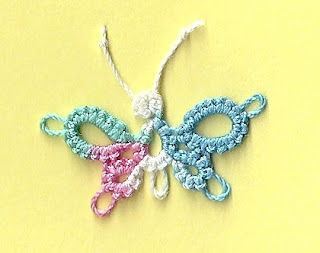 Next came Very Small Butterfly ©Jane Eborall - a flutter to use up the last 1 1/2 yards left languishing on a shuttle. What a sweet, wee bug tatted in Lizbeth®20 Summer Breeze. I altered the pattern at the very end a tiny bit, substituting a Josephine Ring for the head instead of the Jane's split ring. It made the head smaller, which I thought worked out quite well.

Note: LadyShuttleMaker also has at least two patterns in her butterfly books that are great for using up that last yard of thread. 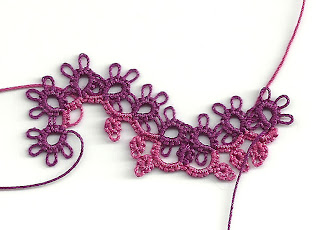 An uncommitted shuttle cries out to be wound, so out came Fuschia Frivolité (size 20) from Shuttle Lab Trends - dept 11. Purchased during Palmetto Tat Days 2011, I have been holding it in reserve for a special project. It pairs well with Lizbeth®20 Boysenberry Dark don't you think?

Maus' Old Fashioned Heart ©2000 is a very special project and will keep me tatting happily through Tatting Tea Tuesday. As of Monday it was only in the beginning stages, but will soon be embellished with beads.

Wishing you all blissful me time to create something beautiful. See you next Tuesday for more communi-tea!
Posted by IsDihara at 1:44 PM 8 comments: