On Monday, Nancy from 'New to Me' blog posted about a darling new addition to her home: 'Oli'...from Elf on a Shelf.  He was already up to mischief on the ride home!

As it happens, we are also pleased to introduce a new addition.


Elfy arrived three days ago. He was so excited he couldn't sit still! Sprout fed him treats, checked on him regularly and thoroughly made Elfy feel welcome.

Here is Elfy on day two. 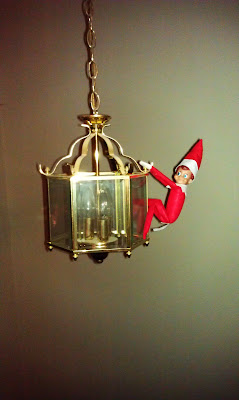 This precarious perch instantly cemented the friendship between Ciarrán and Elfy, who insisted on helping choose the location for day three.  (And showing Elfy his skateboard.) 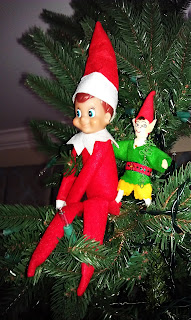 See them both beaming gleefully from the top of the tree?  The poor star was relegated to the bottom: 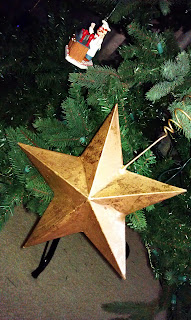 Thus far they haven't gotten into my stash of threads, but I am certain it is only a matter of time.

Update:  Little did I know that The Blogess would be jumping on the Elf on a Shelf bandwagon.  You don't want to miss her doozie of an "elfin mischief" snapshot:  Elves are assholes

Ashley over at Lil Blue Boo compiled a photo shoot of elf antics: 18 Elf on a Shelf Ideas
[Spoiler: Love the image of her elf photocopying his bottom, hee, hee!]

The Huffington Post even covers the shelf-ish shenanigans in this column by Abbie Rumbach:  The Elf Went for A Drink

Enjoy all the impish roguery as you tat today and now I must go prepare for tonight's prank.  Will it be marshmallow bath time, tin foil Viking hat or (the horror!) formaldehyde elf in a jar?  Choices...

Addendum:  Tatman gets in on the impish roguery via Facebook! 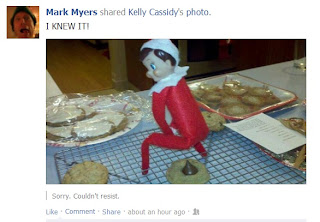 For those who don't use Facebook, let me explain that Mark did not create this naughty elf image.  He was sharing a photo that a girl named Kelly posted.  But his comment is priceless.
Posted by IsDihara at 8:30 AM 2 comments:


This weekend I discovered a 20-inch (50.8 cm) weed on our back patio. Trying to get Big Daddy to "get in the spirit" of lawn care, I added a lone Christmas ball and made an announcement.

"This year, instead of putting up a Christmas tree, we are going to have a Christmas Weed," I said.

He laughed, saying it looked like a Charlie Brown tree.

Now, if he would only cut the grass...


Update:  As it is now Monday and the weed still lives, I offer up a fractured song lyric.

How Grinchy are thy "branches."

As cuddly as a cactus.


Pernicious as a dandelion,

Will you be here past Christmas time?

How Grinchy are thy "branches."


Do you have a Christmas weed (not cannibis) just waiting to be trimmed?  Share a photo!
Posted by IsDihara at 9:34 AM 6 comments: