Remember earlier this summer when I posted about Flying Minor Norwegian Massacre?  Poor Toothless had gotten gnashed to bits by a VBD  (Very Bad Dog).

I had promised a repair/re-tinkering, but realized that it might be faster to make a whole new dragon. Since I could only find three of the the previously-wound four shuttles, I had tabled this project until after Tat Days 2012.

Fast forward to three days before departing for Tat Days.  That is when I decided to tat The Sprout a replacement Flying Minor Norwegian Dragon as a love present while I am away.


Rest easy iridescent dragon fans, As Toothless Turns (into a Hideous Zippleback) will still happen, after I locate the elusive fourth shuttle.

Here is the progress after the first sit-down: 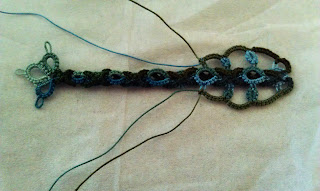 I love how the interlocking rings give the impression of scales.  And it also looks like X's and O's.  (Hugs and Kisses) Second sit-down (same day) resulted in tail number two. 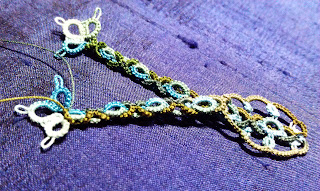 Hideous Zipplebacks are sly, but feisty creatures, as I found out first hand while tatting head number one. He nearly bit my hand off as I tried to close the ring that forms his snout.

An Altoids Smalls tin in the photo below helps to show size.  This gutsy lil' guy is smaller (and a whole lot more spirited) than his predecessor.  The snout of head number one came undone while I was closing the final snout ring of head number two. 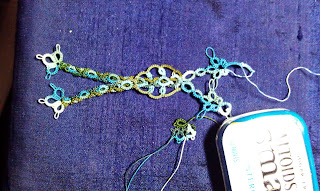 Snout repairs would have to wait until after the wings (So there, snarly wyr!) and his neck scales still need to be added. 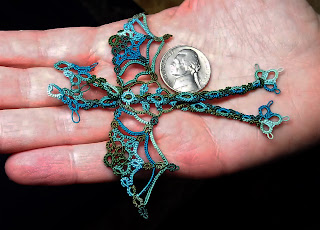 VOILA!  Wings are done, neck scales and snout repairs have been completed.This two-headed thread threat  (hee, hee, a pun) was quite a handful. But how magnificent the outcome!

Not sure yet what The Sprout will name him, but feel free to make suggestions in the comments.

See you again after Tat Days, if I don't see you there!