[Editor's Note: Special thanks to Tatting Pam from Texas who scooped this awesome bit of tatting news!]
Wait Wait...Don't Tell Me!

No, that isn't me trying to be funny. It is actually the name of the radio program where a tatter was a contestant and won a free recorded message for her answering machine.

Anyone who has listened to this program knows how entertaining it is. I find it to be clever and laugh-out-loud funny.

After the second segment, called Bluff the Listener (in which the tatter was featured), actor Kevin Bacon was interviewed and played another game called "Not My Job." Funny stuff!
Posted by IsDihara at 5:53 PM 4 comments:

Tying up a few loose ends before jumping into new tatting projects: can you believe I forgot to count Nelson Edging in my 25 motif challenge?

I posted about finishing the socks on April 26, but didn't count the edging toward my 25 Motif Challenge. 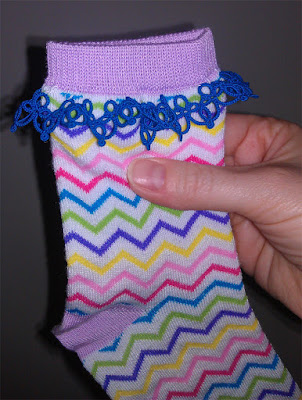 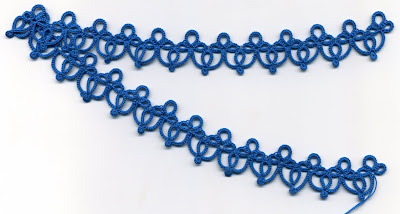 You can see that this project took nearly two months for me to complete. This is a result of "catch as catch can" tatting and is in no way a reflection on Orsi's edging.
Nelson was a joy to tat!

Tatting with small children requires a bit of flexibility. You make the best of whatever tatting time is available. It comes in small snatches, like while you are waiting for the dryer buzzer to go off or for a pot of water to boil. Or after the kidlet(s) are tucked into their beds. Is this why so many tatters of yore kept a shuttle in their apron pocket?

A Brain Cloud?
Lapses of attention are becoming increasingly problematic. Even a bit alarming. (I forgot to buckle The Sprout into the car seat again today. And this time he reminded me while we were on a highway!) I walk around my house in circles because I put something down and can't find it. I search for words and can't remember if I leave things on. Am I losing my mind?

Luckily I found this article online that helped assuage my fears: Pay attention to your fuzzy thinking. Time for some pampering and extra sleep. YAY!
Posted by IsDihara at 1:27 PM 9 comments:

In Memory of Doretha Albee 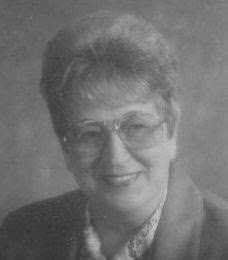 On Saturday, April 16, 2011, Tat Land lost a treasured rose. I never had the pleasure of meeting Doretha Albee, but her contributions to the tatting community were generous and many. For that I am forever grateful.

Georgia Seitz was fortunate to know her and has published this memorial on BellaOnline. Shared here with permission. 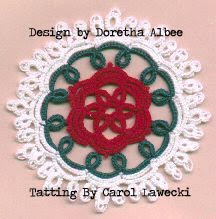 In January 2000, Carol Lawecki tatted this lovely multi-colored "Rose Medallion" by Doretha Albee and has kindly granted me permission to share her photo here. Thank you, Carol!

Did you know that Mrs. Albee designed a Pineapple Doily? Yessirree! Designed in 1997, it is called Pineapple Heaven.

CrazyMom is tatting this lovely doily. You can follow her progress here: Doily Progress

I'm not an I.O.L.I. member. However, PLG of VA tatter Anita Barry shared 4 issues of "Tatting Knots and Notes" from 1999 that she had saved in her library. Was I excited!

The tone of the newsletters was intimate and genial. I immediately felt as if I were sitting with Doretha tatting and chatting over tea. Few bloggers, including me, achieve this level of warmth in their writings. Once I had devoured them all I was left wanting more.

She wrote of hating to cut and tie ends (Don't we all!) and often reworked antique patterns to make use of modern techniques. Clear photos of her own samples rounded out the pattern sections.

Doretha's window on the tatting world was filled with warmth and charm.
Let's all encourage "Tatting Knots and Notes Revisited, Book 1" to be reprinted.

Never having known her, I feel sure that I would have liked her immensely. Thank you, Doretha Albee, for continuing to publish this newsletter after Pat Perry died in 1991.

Thank you also for leaving a legacy of tatting companionship that will grow and flourish for generations to come.

On this last Tatting Tea Tuesday of May 2011, I raise my teacup* in tribute and bow my head in silence before picking up my shuttles.

Wishing you all blissful me time to create something beautiful. See you next Tuesday for more communi-tea!


* Today's tea is an infusion of decaf green/pomegranate/raspberry/mint.
Posted by IsDihara at 4:00 PM 4 comments: