It's Here! Thank You, Tatskool! 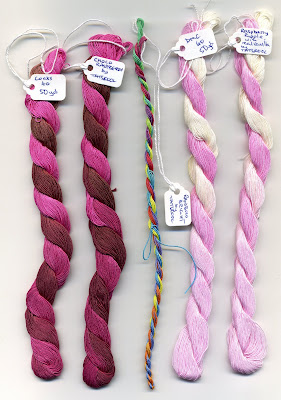 An envelope filled with these scumpt-dilly-icious hand-dyed threads arrived today from Tatskool. Click on the image for a larger view.

I didn't think it was possible but the hanks are even more beautiful than in the photos. As crazed as it sounds, no words can describe my glee at holding them in my hands.
She even included an "itty-bitty" skein of Rainbow Bright! See it?

I had intended to reserve this blog post until I got a sample tatted up to show along with scans of these luscious-looking threads. But I just couldn't wait! It is too hard to choose which colorway to load onto shuttles first. *big.goofy.grins*

Pamela, you've made me a very happy lady. If your other customers are a fraction as excited as I am, you need never worry about where your next dollar comes from.

It's time for another Tatting Tea Tuesday!

Inspiration can strike at the oddest times. While waiting for Fourth of July fireworks display to start I sketched out a quasi-design for the fleur de lis edging. The only sketchable surface on hand was The Sprout's travel-sized magna doodle pad. Too funny!

So now it is time to tat up test pieces to see if it works or if I go back to the drawing board. (Isn't the dreaming phase always the most fun? The application phase can get a bit knotty.)

As I haven't started tatting the design test, I sat down with my green tea and picked a lovely, small tatted heart to write about. It has been dear to my heart ever since it first appeared online. 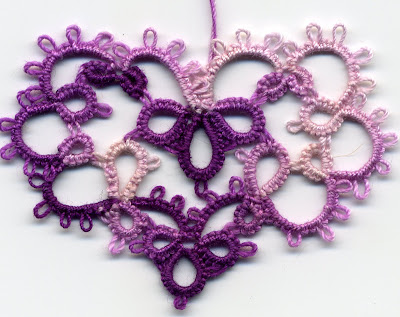 I have made this heart many times. This small heart was created to celebrate Connecticut Tatters Get-together, October 1, 1998.

This heart may be small, but it is big on grace and elegance. Back in January, 2009, I emailed Betsy to ask if she had ever considered working this heart into an edging. She had a forthcoming snowflake book coming out at the time — all snowflakes with 6 or 12 points. Don't rightly know if her snowflake book is out yet. Anyone in tat-land got the latest info on when or if it is published?

Betsy created a Rainbow Heart Bookmark with her small tatted heart design in 2001. It is one I use for my most engaging reads. 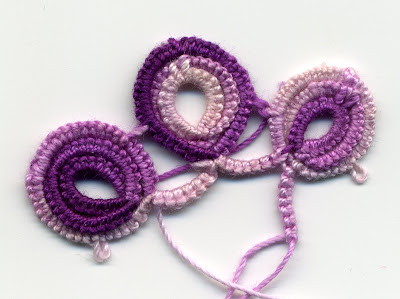 This second snippet I found while organizing my tatting supplies. It is my first attempt at making onion rings. Once again I used the variegated purple thread. Isn't it funny how I gravitate toward the same one, even though I have spool-upon-spool, hank-upon-hank and even a cone or two of cotton thread to choose from?

Are onion rings supposed to have so many layers?

Last but not least is a sexy little black edging I tatted way back in the 1980s. Isn't it stunning? I don't have the pattern written down. Not sure where I found it. Does anyone recognize this pattern?

I will knuckle down and count out the stitches one day, but fine black thread can be terribly taxing on the eyes. No matter how favorable the lighting, my poor, aging eyes strain to scrutinize it.

Off to refill my tea and tat while The Sprout naps.

Wishing you all blissful me time to create something beautiful.
See you next Tuesday for more communi-tea!

Completely off-topic, but worthy of a tangential remark:

Did I mention that I have started wearing progressive lenses? It's another name for no-line bifocals for folks like me who are in denial about our aging eyes.

When Shakespeare wrote, ". . . that which we call a rose, by any other name would smell as sweet," he meant that it doesn't matter what things are called. But ladies and gents, let me tell you, when the "forty-something" life changes slowly creep up on you, it matters.

So in a cunning attempt to camouflage and compensate, I chose a contemporary Anne Klein frame in a brown metallic for a more youthful, professional look. So far the deception is working. 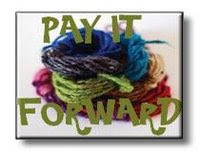 A bit of a post backlog is building so it is time to make an announcement:

An incredible, super-duper awesome gift arrived in the mail this past week from JB!


But I can't tell you about it just yet. All I can say is that it was my prize for winning the PIF Giveaway on JB's blog. I was floored with the workmanship and thought that went into it. And I LOVE, LOVE, LOVE it! See? I can't stop gushing.