Does anyone have any ideas or tips for getting my blog roll to update more frequently?

On a daily basis my blog roll shows items that are at least a day old. When I go to another tatter's blog roll I find several newly updated posts that are not showing on mine.

I am ready to remove this widget because it does not show "real time" updates.

My background has been changing fairly regularly too. Can't seem to find a free background that I like. Am I really that picky?

I really should create my own, but I don't want to take the time away from tatting or my long list of lace guild responsibilities.

Back in the day (2008) I created my own banners and headers for my mommy blog: A Parently Speaking
Posted by IsDihara at 5:58 PM 6 comments:

Is-disabler in the Driver's Seat

Tatting Tea Tuesday got off to a rocky start as I got The Sprout up, washed, dressed and off to preschool. I forgot to pack his tote and snack.

I also forgot to unbuckle him from his safety (car) seat. (Thank goodness I remembered to buckle him in.)

This all may sound like nit-pickin', but the buckle snafu meant The Sprout wasn't ready when the carpool helper came to escort him into school. Holding up the carpool line doesn't ingratiate you with the helpers or the long line of parents waiting behind you.

On the up side, he was washed, dressed, fed and had a car snack, so the morning wasn't a complete mess. For that I am grateful. But I had to drive home, retrieve his tote and drive it back to preschool.

Determined to salvage some tatting time, I brought iPad and tatting and am writing from the preschool parking lot. The one thing I didn't grab on my second dash out the door was tea.

Often we talk of enabling or being enabled by another person's passion. If anyone has a spare scrap of passion to send my way, I could use a bit of a boost. Just call me Is-disabler today.

Here's the silver lining: I am unplugged from phones, Internet and barking dogs. Squeals of glee from children running, climbing, and playing recess games are my "white noise." It is a beautiful day. 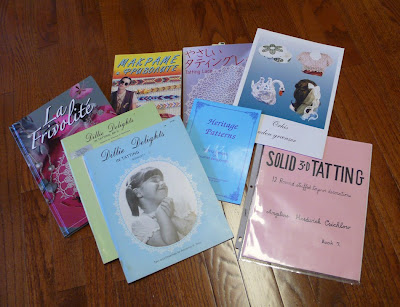 “In my view, nineteen pounds of old books are at least nineteen times as delicious as one pound of fresh caviar.”
~ Anne Fadiman

Boons from the Briny Deep
Yesterday the postman brought a treasure trove of old tatting books sent from a friend. Not even the most successful pirate could have plundered greater spoils, me hearties!

My hands actually shook as I opened Angeline Crichlow's seventh book, "Solid 3D Tatting." The pages had been assembled by hand and bound with a pink satin ribbon. The color photos were hand trimmed and pasted onto mimeographed pages.

Georgia Seitz tells me Angeline put all of her books together that way. The only one that was sent off to be printed and bound was "Let's Tat."

(A squirrel just came up to the minivan and raised up on its hind legs, listening. He (or she) couldn't see me sitting behind the wheel, but could hear the tapping sound as my fingers danced across the iPad's touch screen keys. Sorry I don't have any acorns for you, friend.)

Another treasure is "Heritage Patterns" by Norma Benporath. Did you know that Norma was the only tatter to have been presented with the Order of Australia for her "service to the craft of tatting as a designer and through international publication of her patterns?"

Dilly Delights, books I and II were tucked in the box, along with a beautiful hard-back copy of "La Frivolité" in French, Orkis uden groesner (Hanne L. Pedersen) in German, a wonderful Japanese tatting book and a Russian macramé book that includes a small section on tatting.

All this bounty will be added to my personal tatting library. So please accept my sincere apologies for not sharing any tatting today - or tea. Too much tatting lore over which to pore!

The Sprout's class just came out to the playground for recess so I will break here to watch him play.

All in all, this "fallback plan" turned out to be both productive and relaxing. I look forward to doing it again next Tuesday with tea!

Wishing you all blissful me time to create something beautiful. See you next Tuesday for more communi-tea!
Posted by IsDihara at 3:18 PM 3 comments: