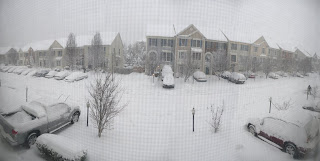 Panoramic view of our neighborhood street
(as seen from our front door)
Or how Silly Hat Central was laid low by stomach flu.

Gastroenteritis is going around my little corner of Tat Land. When my neighbors complained about it raging through their homes almost two weeks ago I thought, "Knock on wood, it passed us by." But I was wrong. 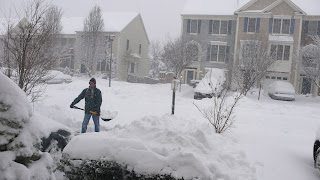 Big Daddy shoveling the driveway
This past Friday and Saturday my little corner of Tat Land also got walloped with record snowfall. No worries! Silly Hat Central was well-provisioned and ready. Friday night The Sprout started vomiting at 1:00 a.m. and had the accompanying diarrhea. It wasn't pretty but Doctor's Mom and Dad handled it.

Last night at 2:00 a.m. Dr. Dad repeated the Sprout's command performance and has been down for the past two days. The Sprout is feeling better but still has a touchy tummy.

I am relieved to report that I feel fit as a fiddle today. Hurray!  Thank you for all your get-well wishes! 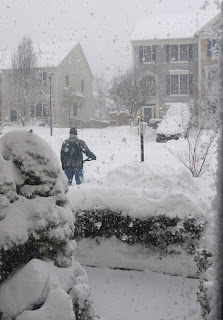 Big Daddy shoveling the driveway
(as seen from our front door)
The weatherman is calling for anywhere from 8 to 14 inches of snow to fall today through Wednesday.

What started out as the perfect snow-in, is turning out to be a gastro-ordeal for the men.

Tatting Tea Tuesday
On a brighter note, I saw this lovely blog post today on the topic of Tea on Tuesday. Christine does include tatting in one of her photos. I wonder if we could get her started tatting, so she could join in the TTT fun?

And be sure to scroll all the way down so you don't miss the GORGEOUS Bougainvillea photo. If the sight of that doesn't dispel the Snowed-In Blues, nothing will.

As for me, no tatting to show you today.

This stunning heart doily made by Carla over at Chiacchierino della nonna stopped me dead in my tracks. I immediately noticed (thanks to Sharon's superb tutelage in the Design_Tat online course) that the split rings leading down to the bottom trefoil would make a dramatic "X" if tatted in a different color.

And I did see this very comfy-looking yoga ensemble embellished with Mehndi embroidery. The design just screams to be tatted, don't you think?

Well, I'm off to squeeze in a bit of tatting me time before the sick men-folk awake from slumber.

Wishing you all blissful me time to create something beautiful.

See you next Tuesday for more communi-tea!
Posted by IsDihara at 3:09 PM 6 comments: 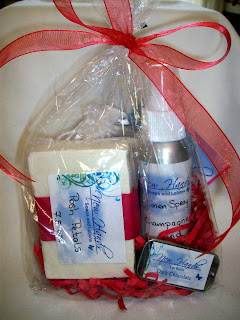 Thank you to everyone who entered! It makes me so happy to share the Valentine love with you all, since you have been so generous with your advice, praise and support of my tatting endeavors.

I entered all participants of my Pamper Yourself Giveaway into an Excel spreadsheet. Everyone was assigned a different number and those who were eligible for two entries were assigned two numbers. I then used a random number generator to pick the two winning numbers.

Congratulations ladies, please send your mailing addresses to IsDihara@verizon.net so I can sent out your prize packages.

And remember, if you weren't a winner and still want to try any of these spa soaps, lotions, linen sprays or lip treatments, head on over to New Hands Soaps and Lotions on Etsy and don't forget to type in the FREEBIE code for a free dark chocolate lip balm.

Pamper Yourself Giveaway Correction and a FREEBIE

Quite a lot of attention is on The Big Game in the US, but for anyone who cares, I must make a correction to the Pamper Yourself Giveaway.

Also, if your name is not picked by random number generator tomorrow and you still would like to try any of these lovely products, Igoya will sweeten the deal by adding a FREE dark chocolate flavored lip balm to your purchase. Just type the word TATTING into the comment field on the order form to receive your FREE lip balm.

Please come back tomorrow, when I announce the two lucky winners!
Posted by IsDihara at 7:18 PM No comments:

In homage to Sports Widows Everywhere
First, a philosophical question:  Can you call yourself a sports widow if your spouse doesn't watch sports?

Here at Silly Hat Central, I'm the big sports fan of the house. That said, I only watch Steeler football, Penguins hockey and DCI World Championships* when I can find them on TV.

(I'm a total pushover for the Puppy Bowl on Animal Planet too.)

*Some would argue that marching band competitions don't count. They never marched in a competitive music corps.

So without further adieu, I present . . . [drumroll]

This article was originally posted on Sunday, February 3, 2008 on A Parently Speaking.

Today's Big Game was a good one. Neither the Giants or the Patriots are my favorite team, but I appreciate a hard-played sporting event. And who doesn't love rooting for the underdog?

Every year at this time I think about the Super Bowl counting system. When those roman numerals flash across the TV screen it's as if the NFL is screaming out how old I am.

That's right. That big, splashy logo is a neon sign of my age.

Does that make me as old as the Super Bowl? Well, yes and no.

So, I'm not really as old as the Super Bowl. I was born 18 months before the first Super Bowl was played. But because of the way birthdays are counted and the month of the year during which The Big Game is held, I get to lay claim to being the same age as the Super Bowl.

I used to pull out this bit o' trivia at cocktail parties. But let's face it, I haven't been to a social function in over a year and half. New moms don't often see the light of day, let alone sip drinks and make witty conversation. That's why we're called Stay-At-Home moms, isn't it?

Actually I think it's kind of cool being able to stay at home. (This from the career woman who swore she'd go back to work. Talk about life being stranger than fiction.)

And saying I'm as old as the Super Bowl is remarkable, if not entirely accurate. So, if I end up with Alzheimers, my family, friends and caregivers will have an easy way to remember how old I am.

Or maybe dropping my enigmatic factoid at a cocktail party of their own.

Got a quirky little fact that's your claim to fame?
Leave me a comment and tell me about it.

I'll post a "Most Likely to Make It Onto a Snapple Cap" list, complete with roman numerals if you really want me to.

Come on. You know you're Snapple-cap-worthy!
Posted by IsDihara at 1:29 AM 5 comments: