Today's post is a culmination of tatting angst and a nod to the hush that seems to be falling over Tat Land of late.

Please join me as I pour a tall glass of "Iced Tea" by The Carpenters and fracture one of their best loved songs.

I know you were expecting to hear the tune, "There's a Kind of Hush (All Over the World)".

I had originally planned this as a Tatting Tea Tuesday post and it was my attempt at a tie-in. Yes, I hear the crickets...

I freely admit I am not as good at Tatting Tea tie-ins as Gina the Tatting Goddess. But I can fracture a quote (or a lyric) with the best of them!

You know what I mean.

The only sound that you will hear


What? More crickets?!? Y'all sure are a tough crowd.

Before you start lobbing rotten tomatoes, here is a fascinating PDF file. It is a tatting story that The New York Times originally ran on February 2, 1913. The title of the story was Tatting Rest Cure for British Brains.

Can you believe that under the headline it said this? "beats playing solitaire"  Oh sweet mercy!

I particlularly was amused at the spelling of the word doily : "d'oyley."

Another amusing bit was the term "toilet mat." Today, wouldn't a toilet mat be one of those fuzzy rugs that people use to accessorize their bathroom decor? I'm pretty sure that in 1913 they were referring to a lacy dresser scarf or some such.

Now, the next time you find yourself in the loo, the words "toilet mat" will pop into your head. LOL!

(To come full circle, it seems The Carpenters released their version of the Neil Sedaka song, "Solitaire" in 1975 and it reached 17 on hit charts of the day. As a kid my first LP was one of The Carpenters albums. Just more useless trivia...)

I know, I know...don't quit my day job.  Aren't you glad I shelved this topic in favor of dishing on HDT stash?

Have a great weekend!
Posted by IsDihara at 12:38 AM 8 comments:

What's in Your Stash? 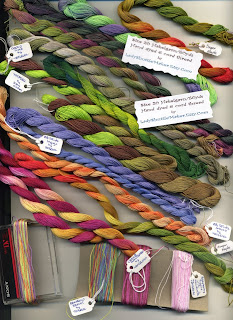 My HDT stash.
Please forgive this quick post, I have a couple of burning questions for HDT lovers:

Are you a HDT hoarder? A user?
How much HDT is in your stash?

Lately I have been feeling guilty reflective [They would take away my Unrepentant Thread Junkie membership card if I lapsed into feelings of contrition.] over recent HDT purchases. And my desire barely rational need to purchase more is getting stronger.

Don't get the wrong idea. I don't regret a single (or multiple) skein purchase. But I know I won't be able to use all this gorgeous thread in the pre-holiday hustle, either to make gifts or to shorten my "must tat" list.

Let's face it, I currently possess enough threads (not just HDTs, but total thread stash) to last multiple lifetimes. Yet I still must have more hand-dyed thread.

As radical and absurd as it may seem, HDTs don't always bring out the best in a pattern or design. Sometimes it is better to pair a variegated thread with a solid. And yes, there are times when only a solid color will showcase a design to its best advantage. But I'm no expert in making those weighty decisions. Still very much a novice!

Back to the pretty colors. LOL!

Looking over the photo, I see a shortage of rusty red or blue-blended colorways. (Excepting Tatskool's awesome indigo and blue skeins, of course.) There is also room for something deliciously creamy (maybe some Vanilla Sky?). Maybe some Helm's Deep...

See how easily I enable myself?

Could you help me assuage this wicked HDT craving?

Show me your HDT stash. Don't hold back. It will help me put mine into perspective.
Posted by IsDihara at 12:01 AM 16 comments: