Light and Lacy in Yellow 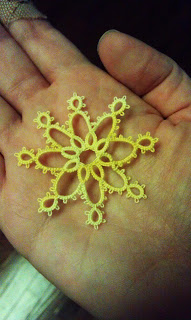 In spite of the long list of post-Tat Days projects, I couldn't resist joining in Jon's Tat Along to make the Norma Benporath Lace Mat.

My rationalization? It is perfect in-car tatting for after-school dismissal. Yesterday I had planned to start round two, but got caught up in an utterly diverting chat and didn't tat a double stitch.

Jon's post from September 12, The Lace Mat, gives great historical details about this pattern, but I will try to sum up (so that I can remember in the coming years).

On March 16, 1938, The Queenslander newspaper published this pattern under the headline "Tatting for Busy People" giving Norma Benporath a proper byline.  (Yay!)

The National Library of Australia (NLA) granted Jon permission to rewrite the patterns it has archived to preserve the designs and make them accessible to current tatters.

Jon included a few handy notes for folks eager to start the Tat Along. I was curious about bullet number three in particular: 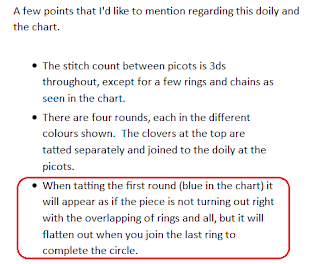 Here is what my round one looked like before I flattened it out with a quick shot of steam. (After first pinning the lace to my ironing board, or course.) 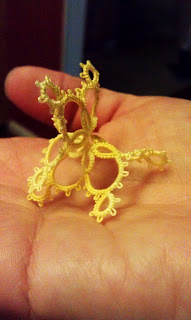 Thank you Jon for being so wise as to include this note. I would surely have abandoned the work had you not advised me to not panic. ツ

Later this afternoon I will begin round two for Tatting Tea Tuesday. Imagine me with a travel cuppa of chocco-strawberry decaf with a splash of chocolate soy milk. NPR playing on the car radio. Happily tatting along. The sunny yellow thread juxtaposed with the soggy, grey skies.

That is how I plan to banish the rain and continue dreaming of Indian summer.

Wishing you all blissful me time to create something beautiful. See you next Tuesday for more communi-tea!
Posted by IsDihara at 9:09 AM 11 comments: