There are some CRAZY socks out there. Anatomically correct bone socks, toeless socks (which look kinda cute in the photo), Union Jack socks, even Foot Kandy.

Every once in a while, I read about a tatter who has purchased novelty socks with shuttles on them. Who sells these?

Will one of the Palmetto Tat Days vendors have them?
Posted by IsDihara at 11:18 AM 7 comments:

July kicked off with fireworks and a wonderful Tatting Tea Tuesday! Sw4nkyL4c3r dropped by for some shuttle tatting. (She is a needle tatter.) She wanted to get in some shuttle practice in order to demonstrate Civil War-era tatting during the commemorative event later this month. (Sesquicentennial of the American Civil War and the Battle of First Manassas)

We noshed on "Romeo & Juliet" cookies from the bakery, drank strawberry tea, tatted and chatted the afternoon away.

She was absolutely right. She is a fast needle tatter. Her stitches do not suffer in the least for speed. They are uniform and evenly tensioned. Talk about a natural.

I also introduced her to the owner of the Yarn Cloud (the shop where I teach shuttle tatting). The owner asked if she would teach a needle tatting class in September!

This is marvelous news for anyone thinking about trying tatting!

Yes, Virginia, there is a Santa Claus
It is Christmas in July and I believe! I feel like standing on the street corner, yelling "Hear ye! Hear ye!" because Yarn Cloud sells Lizbeth threads!

Many have sighed heavily and resigned themselves after JoAnn Fabric and Crafts limited sales of Lizbeth threads to a small fraction of their US stores. Hobby Lobby came to the rescue, but the closest Hobby Lobby in my area is 35 miles away. So I am thrilled to have a local shop that carries quality tatting thread. 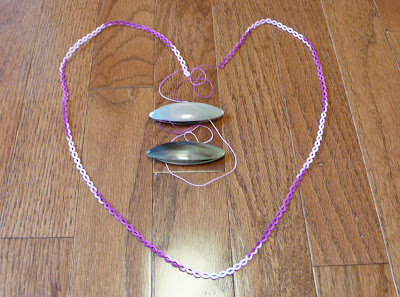