Tiny Round Teapot is Finished! 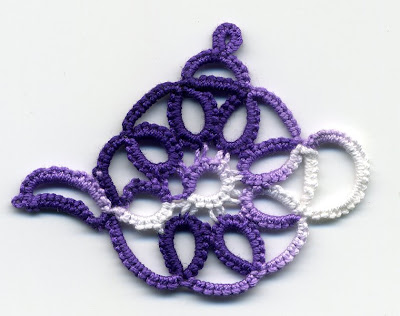 Thread: Handy Hands' Flora 20
White-to-Dark Purple variegated
I finished tatting Martha Ess' Tiny Round Teapot. Isn't it adorable? After all that built-up angst over the folded split ring, it turned out to be the easiest thing in the world to do. Silly me.
Can you believe I started this on June 23? If you would have told me that it would take me a whole month to tat this, I would have said you were crazy.
Ultimately careless mistakes ruled the day. You'll see that when I started, it looked as though I was tatting around the same direction as the picture in the book. Maybe I was. But I realized later that my teapot was tatting up in the opposite direction of the one in the book. Huh?
Guess I really shouldn't be surprised. Swords get rusty if left unused. It is time to get cracking and sharpen my blade. (Practice, practice, practice.)
Note two other bloggers who tatted this charming teapot. Their teapots face the opposite way.
Icelas Fishbowl of Tatting: April 26, 2009
The Space Between: Of Teapots... : April 7, 2009
Here is what my teapot looks like facing the other way. See how after the first the picot joins show? But if you look at the first photo, the first picot join shows on that side. 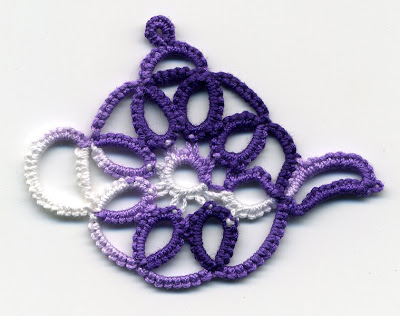 I'm chalking up the directional issue to my own careless error. It really is a delightful, wee teapot. And truly not difficult at all.
The truth is, this little project has blown the barn doors wide open for me creatively speaking. Martha Ess achieves a perfectly delightful teapot shape with simple, clean lines. Brilliant!
Posted by IsDihara at 12:01 AM

So pretty. I LOVE all Martha's work. My favourites are in her New Critters on the Block book. Lovely dinosaurs for little boys!! Then there's her naked mermaid which is always a HUGE pleasure to work too.

Very pretty! To me, it just looks like you're ready to serve tea to the person on your right. ; )

Such a lovely little teapot. I am ordering the book next week. I think I will get a couple more Lizbeth threads too. Thanks for showing your teapot.

Your teapot turned out really cute! I love Martha's patterns! :)

Love your tea pot. A friend added a tail to it and turned it into a bookmark. What a neat idea for a quick gift for someone. You did a great job.