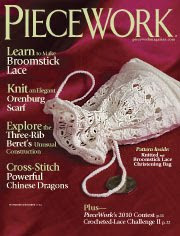 If you haven't seen it yet (subscribers already have received their copies), the November/December issue of PieceWork magazine devotes its "Trimmings" section to tatted holiday ornaments.

It includes a five-pointed and a seven-pointed motif created from a modified lace centerpiece pattern. Jane Moody did the pattern modifications from a centerpiece in Clark's O.N.T. Crochet and Tatting Book No. 2, published in 1916.

A third pattern was used to create a tatted cover for a satin Christmas ball ornament. Jane Moody used pattern No. 515 from "Tatting by Adeline Cordet, Book No. 5," also published in 1916.

This issue focuses on the Crochet-Lace Challenge winners and contributors, but there is an article on "Pointed Lace in Crochet Tatting" from Weldon's Practical Needlework, Volume 10 and Link Pattern Lace from Weldon's Volume 12.

I do not get any kickbacks or compensation in any way from this magazine. Pure and simple, I am delighted that they have been including more tatting in recent months and want to spread the word.

If you go out to pick up an issue of PieceWork just for the tatting, please let Editor-in-Chief Jeane Hutchins know! She really does value feedback and we're seeing more tatting in this magazine primarily because tatters have asked for it.

Here is her email address: jeaneh@interweave.com

The November/December 2009 issue hits newstands on November 3rd. Just in time for Tatting Tea Tuesday!
Posted by IsDihara at 10:00 AM

Thank you so much for her email address! I will go look for that mag today and email the Editor in Chief! I have heard a few weeks ago about this coming out.

Thanks for letting us know about this! As soon as I get a chance I'm going to pick this up. And let them know I did it just for the tatting!

Thanks for this info. I hope this book is hitting book shelves in Canada on the same day!!!! I'll have to have a look and I will also contact the Editor. Thanks again.

I subscribed just a moment ago based off the online tatting class mentioning the magazine. Just wrote and sent in feedback, hopefully there's plenty of tatting to come! Thanks for her e-mail :)

I love this magazine! It's a bit pricey, but I always learn so much. The tatting patterns are fabulous!

Thanks! I signed up for the trial issue. I'm looking forward to checking it out. I'm excited!
:) Ann