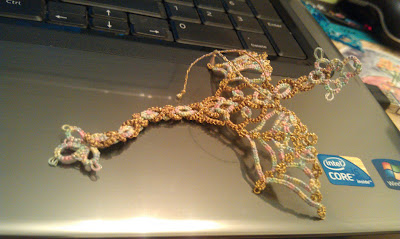 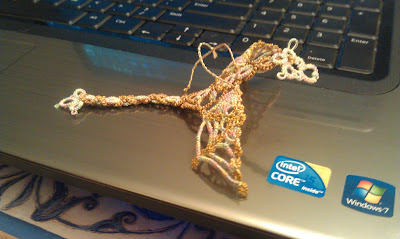 Thank you, Anne, for sharing this marvelous pattern!
Posted by IsDihara at 1:50 PM

Toothless looks like he's just landed or ready to take off. Those colors really work together. Great job!

Gorgeous! I'm glad the Sprout appreciates his Minor Dragon, even if he is Toothless!

Is Sprout going to take lessons on How To Train Your Dragon?

Tattrldy, I had to snap a quickie shot with the cell phone, as Toothless doesn't stay still for more than a few seconds. He and The Sprout have that in common. :-)

I think I'm up to my fourth Flying Minor Norwegian Dragon now! It IS a marvelous pattern, and Toothless is a great advertisement for us. I really love the thread you did him in.

What a superb dragon - handsome, golden and proud! I am truly inspired, as I have had a longing to do this pattern and it is always put off... Maybe now.... Thanks for sharing this gorgeous fellow!
Fox : )