In Memory of Myrtle Hamilton 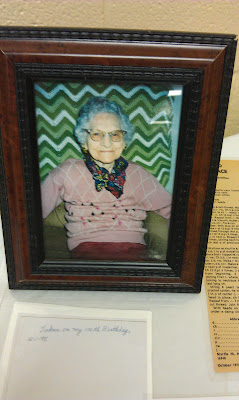 A lovely tribute to Myrtle Hamilton was on display at 2011 Palmetto Tat Days. Pam Freck, one of the program coordinators for Tat Days 2011, told me that the display would travel to the South Carolina State Fair after Tat Days had ended.

Myrtle (Bartoo) Hamilton was born December 1, 1895, in Potter County, Pennsylvania. One of 12 children (9 surviving), Myrtle grew up in a fairly prosperous farm family near Mills. She lived in Coudersport, PA, roughly 20 miles from her hometown, and died in 2003 at the age of 107.

Mrs. Hamilton holds a special place in my heart for two reasons. First, she worked tirelessly to keep tatting alive, contributing many wonderful designs for future tatters to enjoy. 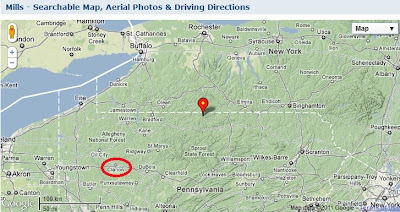 Second, it makes my heart glad to know that she lived no more than 125 miles away from where I grew up, not far from Clarion, PA. 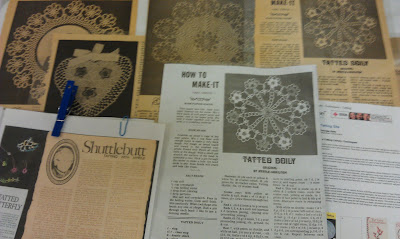 In her "Celebration of Tatting and the Life of Myrtle Hamilton" for the Online Tatting Class, Georgia Seitz wrote:


"Tatting had many ups and downs during the second half of the 1900's and through those long years, I believe that Myrtle Hamilton became one of the guardians of the art of tatting. Myrtle produced wonderful designs of all kinds which were published in the Workbasket, Stitch n Sew, Popular Needlework, Old Time Crochet and many others. I firmly believe that Myrtle kept tatting alive in the US for decades." 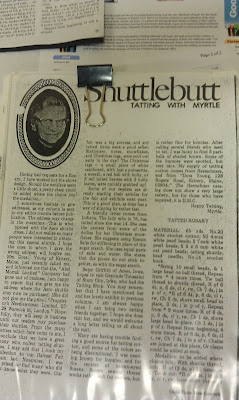 
"The tatting world has been enriched by dedicated teachers and designers like Myrtle Hamilton who helped prevent tatting from becoming a lost art. Her Workbasket designs were basic and in classic style. Any of the older issues contain tatting gems and would be excellent additions to any library." 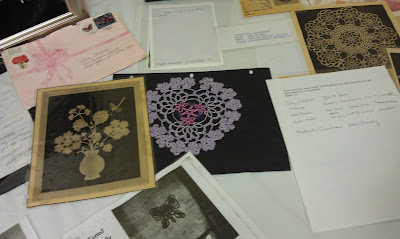 I received one of Myrtle Hamilton's heart patterns in an online exchange in 2003. 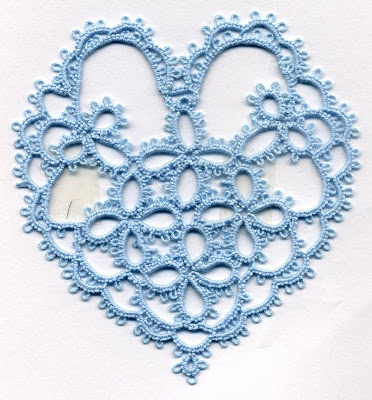 The heart was done by Terry McGuffin who re-wrote the pattern to incorporate split rings and chains so that it could be tatted continuously, without all of the cut and ties in the original design. You can read about it here.

Myrtle Hamilton exchanged letters with Betty Magill of Kinards, SC, who shared the photo taken on her 100th birthday (top). Pam Freck shared a copy of this photo with me. Thank you, Betty, and thank you, Pam Freck, for sharing this information with me. It is like receiving a hug from a tatting angel.

Thank you!!! I poured over the display and LOVE her use of the cluster of picot'd rings. She has inspired my thinking for future projects.
j.

Thank you! I know the name Myrtle Hamilton, probably because I used to read my mother's Workbasket magazines from cover to cover. What a wonderful inspiration for all of us to do our bit to keep tatting alive!

Thank you for sharing this!

I didn't get much time to spend looking at this display, and I wish I did. Thanks for sharing.

Thanks so much for this post! How amazing that Myrtle lived to be 107!!!
It's kind of mind-boggling!

I was not aware that Myrtle had a column in Workbasket Magazine! It's amazing that this particular column mentions a change to the company that manufactured the Aero Shuttle in England! Do you know what year that column was written?

Also, Myrtle mentions Dora Young. Is it possible this is the same Dora Young who patented a tatting knot and developed the split chain? Dora and Myrtle were obviously passionate about tatting, and we owe them so much for keeping the 'flame' alive.

Thanks for all your reports and photos from Tat Days!

I am told that very many of the Workbasket patterns were by Myrtle Hamilton, but they did not name the designers. You can see her personal style in quite a few.

Do you know the source for the heart pattern? I would love to make that if I can lay hands on a copy (either the original or Terry's update).