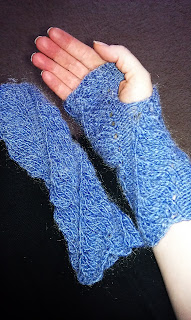 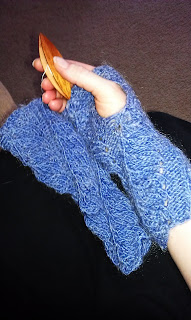 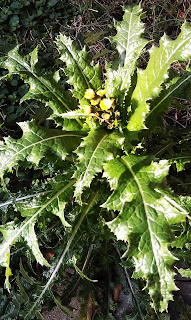 Christmas Weed Update
Can you believe the Christmas Weed still lives? Prickly sow thistle (or Mr. Pernicious) now stands a dastardly 24 inches tall (61 cm) and is taunting us with yellow flowers. I need an intervention!
Posted by IsDihara at 9:13 AM

Phew, lot of clunies in that cross! And hanging clunies too. I may need to may them into a new challenge for myself.

I'm wearing my tatting mitts now... so comfy and warm! Marilee is so creative! It's a great joy to spend time with her. She thinks out loud, and I am amazed at the ideas she develops. My brain just doesn't work that way!

I want your mitts

CrazyMom, I knitted these using the lace pattern from the book, "Wrap Style," (Interweave Press) called Spiral Shell by Deborah Newton, page 21. The four-round pattern is built upon multiples of 12 stitches.

Those fingerless gloves are such a great idea. My daughter knits, maybe I can get her to make me a pair. I still haven't convinced myself to even try clunies. Maybe when I find a pattern I just have to make!
Mr. Pernicious is growing like a weed ;-) You do know what comes after flowers, right? Seeds!